When looking into acquiring a used car, for most folks, leasing instead of buying that “previously owned” cream puff isn’t even on their radar. But, as car prices have continued to rise faster than inflation, used vehicle leasing has also grown. Our FYI reporter Lauren Morrison looks into the pros and cons of this rising tide. 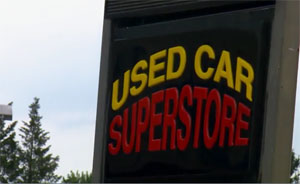 LAUREN MORRISON: “We’ve seen leasing as a whole really take off over the past couple of years. In fact, almost one out of every 3 new cars is leased!”

MELINDA ZABRITSKI: “With new leasing just becoming such a large component of the market, as those vehicles come back into the retail market, we’ll expect quite a bit of those vehicles turn into used leases.”

LAUREN MORRISON: While the used leasing market still makes up a small piece of the leasing pie, it is accelerating. According to Experian’s State of the Automotive Finance Market report, used leasing grew from about 3.2 percent in 2015, to around 3.7 percent in 2016.

But it’s by volume where we really see the surge. 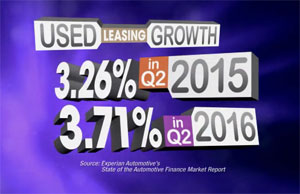 LAUREN MORRISON: From a buyer’s standpoint, leasing used can mean more money in your pocket.

MELINDA ZABRITSKI: “Overall, when you look at a lease, you’ve got, you know, the same make and model as a lease versus a loan can be about $100 less, and then when you move into the used lease market, again, you’ve got that savings.”

LAUREN MORRISON: It can also open doors to makes and models that weren’t in your original price range. This is especially true of younger buyers that might want an upscale car, but whose college debt and entry level jobs severely limit how much they can spend.

LAUREN MORRISON: “Instead of buying an entry level vehicle, many people are choosing the used lease option as a way to get into a luxury vehicle.” 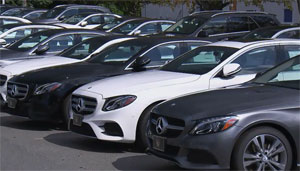 STEVEN SZAKALY: “We really haven’t seen it a lot in sort of the mass market brands that you would think would start this leasing program.”

LAUREN MORRISON: And not all lenders are on board just yet…

MELINDA ZABRITSKI: “We’re starting to see a few banks and a few credit unions move into the market, but overall, it still tends to be a relatively small number of lenders who are engaging in used leasing.”

LAUREN MORRISON: But as more and more off lease vehicles roll back onto lots, all signs point to continued growth of used-leasing.