Visiting a Porsche Experience Center, either in Atlanta or in Los Angeles, is a game changer for anyone that wants to take their driving to the next level, while at the same time satisfying ones Porsche passion. Our Stephanie Hart spent the day at “PEC-LA” driving a variety of Porsche’s high performance hardware on a unique track that guarantees a truly immersive driving experience. 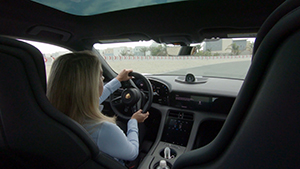 STEPHANIE HART: I’m excited for today, but I’m also a little bit nervous because I’ve never driven on a track before, let alone driven incredible, powerful Porsches’ on a track before. Today I’m going to be driving four of them. I do know I’m in good hands with the instructors here; they’re going to be guiding me on the radio the whole time and I do know I need to trust these cars. So c’mon, let’s do it.

I get behind the wheel of this all-wheel drive Porsche 911 Turbo.

FRANK WIESMANN: We like to refer to them as “driver development tracks” because its really, again, less about speed and more about each driver finding improvement and gaining confidence-- building confidence-- to become a better driver which leads to more fun behind the wheel.

STEPHANIE: My first run didn’t go exactly as I planned… so let’s try that again. 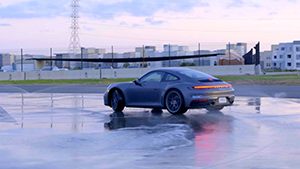 NSTRUCTOR: Okay, Stephanie. You are up— on my go. Three, two, one— lets go, go, go. Nice! Nice and tight through the slalom. Now we are going to stay to the left, stay to the left. Beautiful job.

STEPHANIE: Now, on to this beast: the 750 horsepower all-electric Porsche Taycan Turbo S. I did a couple laps in sport mode and a couple laps in sport plus mode. I’ve been dying to drive this car, but when I reached the kickplate, my anxiety kicked in-literally. Once you drive over this, the car’s rear end is kicked out from under you and sends your car into a spin. Pretty scary, especially if you’ve never done it before— like me. The goal? correct the car’s spin and point the car back straight.

It’s pretty clear some drivers knew what they were doing… and others did not… regardless this is such a great learning tool.

RICKY DOWNTON: It’s a lot of fun, but learning where the capabilities and limitations are of not only yourself, but also our Porsche vehicles-- and this can transfer to other diff manufacturers as well. learning to drive a car near its limit will show you what a car can do and you’re not concerned about it as much when you are daily driving. What if you come into a corner too quickly you have to get on that threshold braking and an emergency stop… you have now built up your skill set and prepared for that because you have done it here at the Porsche Experience Center.

STEPHANIE: Alright, so now I’m behind the wheel of the Porsche Cayman 718 GTS. It feels really good on the track. In fact, it’s a sports car that’s perfect for this section which resembles a windy, country road. The 718 has less power than the last two Porsches I drove. But, it hugged me like a wetsuit, and has a firm ride with nimble handling. I felt my confidence really soar behind the wheel.

Next up, a series of off-road challenges behind the wheel of the Porsche Cayenne SUV. I’m excited about this next one that looks really cool.

STEPHANIE: My instructor’s guidance over the radio was especially crucial during this next challenge. As you can imagine, driving up this steep incline was a lot easier than coming down.

After that, it was time to call it a day. I won’t be the next Indy 500 winner, but that was not the goal. Yes, I drove some incredible Porsches, but I also feel I really improved my driving skills, challenged myself and had tons fun.

And isn’t that what it’s all about?