Automotive museums come in all shapes and sizes, but one that truly stands out as unique is now celebrating its 60th anniversary located just outside Chicago, the Volo Automotive Museum not only showcases memorable cars it also helps fuel the dreams of individual car collectors, our FYI reporter Stephanie Hart explores.

STEPHANIE HART: The volo museum is the king of car museums… but it’s so much more than that… you can feel Americana at its best as you walk around.

STEPHANIE HART: This is pretty cool. 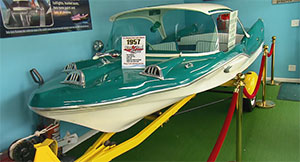 BRIAN GRAMS: Yeah in the late 50s they were very short lived boats that looked like cars. You will see a lot of characteristics - like these have the tail lights of a 1959 Chevy- Duval -headlights, fins, you see but very short lived.

STEPHANIE HART: How do they drive?

BRIAN GRAMS: Not very good. As a boat not very well.

BRIAN GRAMS: There’s a place in Wisconsin where you can actually rent these for an hour or so and you pay a pretty big premium to drive them and it’s all about the nostalgia of it because as a boat they don’t drive very well. 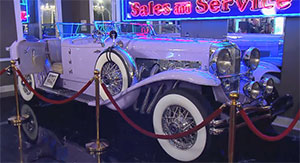 BRIAN GRAMS: Exactly. This here’s are Duesenberg room. It’s the first room you enter as you pass our ticket booth. We like to say we like to start the tour off with a bang.

STEPHANIE HART: Only 63 Duesenberg 2’s were made, and 15 are here at the volo museum. The cars were very expensive to build. Each original body style was precisely measured, grilles, bumpers and other details were custom made, and each car was hand-assembled by a team of craftsmen in Wisconsin. The original Duesenbergs apparently drove like cement trucks. The new updated versions have a really nice ride. A ford engine, a v-8”, “independent suspension and pretty much all the modern amenities that you could want while still maintaining and celebrating that old world charm.

BRIAN GRAMS: We got one here and it’s a silver coupe and it’s labeled 20-grand because that’s what the price was back in 1936. 20-thousand was a lot of money back then.

STEPHANIE HART: Car sales fund the museum. At any given time, there are 300 cars for sale here. Volo says they sell about one thousand cars a year all over the world. Most sales are done online. 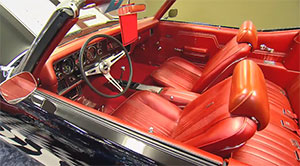 STEPHANIE HART: It’s like taking a step back in time, one mile at a time.

JULIAN BEDOLLA: I think that’s crazy because we came in here expecting to see some really classic cars and the fact that they’re for sale that’s awesome.

STEPHANIE HART: Different modes of transportation are here in this room. The collection includes whizzers.. which were motorized bikes.. produced between 1939 and 1965. 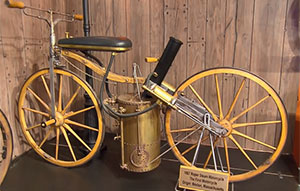 STEPHANIE HART: Is it the first motorcycle or isn’t it?

BRIAN GRAMS: My opinion a motorcycle is a motorcycle. It doesn’t matter if steam or gas powered the bike it was motorized so I think the roper is the first one.

STEPHANIE HART: And for spectators with a sweet tooth this Cushman three wheeled scooter delivered ice cream in the 1940’s. 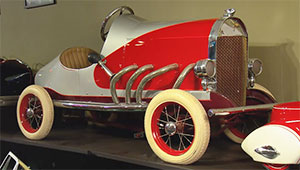 STEPHANIE HART: From the 1920s through the 1950s pedal cars were a popular and expensive gift for children. The volo museum has a big collection of original restored pedal cars. The details are incredible! Back then parents could option them out with things like white walled tires and special grills. Some of them even had working suspensions. For the young and the young at heart, there’s something to fuel everyone’s fire at the volo museum.

BRIAN GRAMS: Walt Disney said my park will never be done and that’s kind of our philosophy too.