Our Two Wheelin’ segment shines a light on the latest bikes, motorcycles, and scooters… whatever’s hot on the rider’s market today. But the collective history of motorbikes is just as rich as their car cousins. Well, as luck would have it, our FYI reporter Yolanda Vazquez has just ridden in with an all-American history lesson on two wheeled cruising.

DALE WALKSLER: Away we go…

YOLANDA VAZQUEZ: Buckle up, cuz like me, you’re in for one heck of a ride when you visit the Wheels through Time Museum in Maggie Valley, North Carolina. 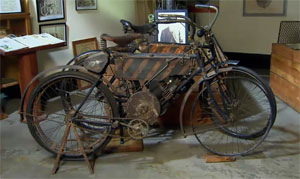 DALE WALKSLER: There’s 27 different brands of American motorcycles here, from Ace to Yale, all inclusive and they all run.

YOLANDA VAZQUEZ: Dale Walksler is the founder of the museum. If his face or bike-riding antics look familiar, that’s because he stars in a TV show called, “What’s in the Barn.”

Now in its third season, Walksler says it’s a great history lesson with a fun way to get there.

DALE WALKSLER: Whether it’s helping an old lady or finding just what fits here at Wheels through Time…..that’s what’s in the barn.

YOLANDA VAZQUEZ: This is your first bike.

YOLANDA VAZQUEZ: And today, he has a 38,000 square-foot space filled with hundreds of rare American motorcycles.

DALE WALKSLER: I’ve been collecting bikes for so long. But I actually remember nearly where every bike and every part and every story is because I really don’t collect a bike unless it has a great story.

YOLANDA VAZQUEZ: From board track racers to hill-climbing bikes to military motorcycles. There’s even an entire floor dedicated to American dirt track racing. And let’s not forget the Chopper Graveyard. But Walksler’s true pride and joy is the Founder’s Gallery.

DALE WALKSLER: What that means is these are motorcycles that were built and owned by the people that invented the motorcycle. 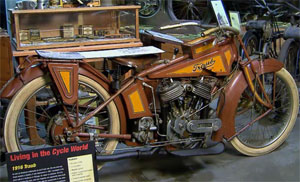 YOLANDA VAZQUEZ: For example, this 1914 Flesher Flyer, a one-off built by Louis Flesher of Nebraska. Or how about this 1913 Indian prototype built by Oscar Hedstrom? It has a dual exhaust and dual kickstarters. And you’d be hard pressed to see one of these--a 1916 Traub--which stumps Walksler to this very day.

DALE WALKSLER: I found the Traub 18 years ago with a very interesting story and have now learned that with 40 years of research - nobody knows who is Mr. Traub.

YOLANDA VAZQUEZ: There’s a section of the museum called Homemade America. It highlights machinery that was created using a motorcycle engine. Take, for example, this personal watercraft. It was powered by a 1925 Harley Davidson engine and is thought to be the very first jet ski.

DALE WALKSLER: In the day, you could buy an old motorcycle for 4 or 5 dollars. Well, that gave you a power plant from which you could make an ice cutter, you could make a snow blower or a rototiller or even an airplane.

YOLANDA VAZQUEZ: And since every bike has a story, you’ll often see photos, posters or handwritten letters nearby. For Walksler, the people who rode these bikes are just as important. 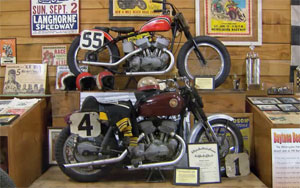 YOLANDA VAZQUEZ: His 1957 Harley Davidson, known as the Duck Bike, is on display, along with mementos from other riders like Ricky Graham and Brad Andres, who won the Daytona 200 three times.

YOLANDA VAZQUEZ: Walksler can often be found in his repair shop working on a number of bikes at one time. He started videotaping his efforts years ago.

DALE WALKSLER: …you can have more fun riding these old motorcycles… 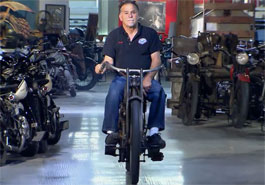 YOLANDA VAZQUEZ: The show has elevated him to a new level of fame with hundreds of thousands of visitors stopping in to see his historic memorabilia and other motorcycle artifacts.

DALE WALKSLER: And then, of course, we have our guest register. I have stacks of registers. People leave there DNA here every day.

YOLANDA VAZQUEZ: And Walksler wouldn’t have it any other way. He’s a true motorcycle enthusiast who revels in discovering obscure bikes and doesn’t hold back on sharing them with the world.