10 Fuel Saving Tips You Can Do Now 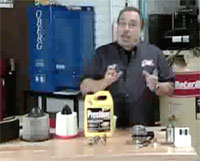 There are lots of ways to improve fuel economy and lots of ways to waste money trying to improve fuel economy.  Not the least of which are miracle fuel improvers.  They don’t work, don’t waste your money.  Now you may have a diesel engine and you may be tempted to run that diesel engine on vegetable oil.  Well don’t do it; it will work for awhile but it could cause internal engine damage from deposits over the long haul.  And remember if you live where it gets chilly in the morning, that vegetable oil could look very much like lard on a cold morning, and the engine isn’t going to run.

Something else to be concerned with, most parts of the country have new fuel, it’s called E10.  It’s 10 percent ethanol, 90 percent gasoline.  Now ethanol is a renewable resource and it cleans up tail-pipe emissions but it lowers fuel economy.  And don’t confuse it with E85 which is 85 percent ethanol and must only be used in cars that are flex-fuel capable.

Now some of the practical things:  Tire pressure; check it regularly; set the tires to the specification inside the door of your car.  Clean fuel filter, good spark plugs.  And there are some sensors that can dramatically reduce fuel economy.  These are: inlet air temperature sensor; oxygen sensor; mass airflow sensor and no, don’t look for codes because they can be out of spec and reduce fuel economy without setting codes.  Dirty anti-freeze will do it as will a bad coolant temperature sensor or a bad thermostat that makes the car run too cool or makes the computer think the car is running cooler than it should.

Air filters should be replaced when they look like this.  And this sucker is going to cost you 10 to 12 miles to the gallon, never let your air filter get that bad.  Heavy oil, a lot of you seem to think that that’s better for an engine, well it isn’t.  The only thing thicker than recommended oil is harder to push through the engine.  That requires power and that reduces fuel economy.  The battery if it’s not in good condition.  That will cause the alternator to charge all the time, trying to charge the battery.  That consumes power and that reduces mileage.

And last but not least, all that junk in the trunk.  Get rid of it because you are paying for every mile that you haul it around.