Air conditioning is mostly standard equipment on automobiles these days. I guess the average person really wouldn’t want to do without air conditioning. But believe it or not, there are some issues. Number one, your air conditioning system may have a very foul odor when you turn it on. Well, that’s due to mold and mildew and dirt and so on that builds up in the evaporator. 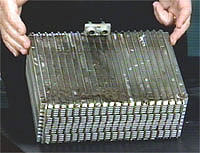 Now, here we have an evaporator and you can see all of the dirt that has accumulated on it. Now, over time, what’s going to happen here is, not only will you have the odor, which could be a health hazard inside the car, but the dirt that accumulates is going to hold moisture, and the combination of the dirt and the moisture is going to eat into the aluminum of the evaporator. It’s going to cause it to leak. And when it leaks, the refrigerant from the system, it just leaks out of the system and you no longer have air conditioning. 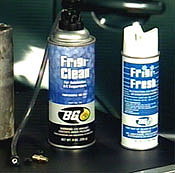 The issue here is this is an outrageously expensive part to replace. It’s buried deep inside the dash. You have to remove the entire dash on most cars to get to the evaporator. So the part is expensive, the labor is outrageous, so it’s something that you really don’t want to have to replace. Now, how do you go about preventing that?

Well, there are products that do a minimal job of cleaning, like the Frigi_Fresh, that will just kind of keep it freshened up. But at least once a year you should use a product like Frigi_Clean. Frigi_Clean has an adaptor that comes with it that gets installed in the housing under the hood and then the foam from this is injected through that adaptor and it just floods this whole evaporator area, cleans it. Cleans it like brand new. Makes it last longer, and does away with the odor.

By the way, if you do need a major air conditioning repair, don’t forget that one of the parts that always has to be replaced, receiver/dryer or accumulator. They look very, very similar. If you don’t do that, all the money you spend on the rest of it could be in vain.