That fender bender that doesn’t look like there’s any damage, well that may not actually be the case. See, modern cars, they may have all kinds of sensors and different things built into the car. And, even in the back for that matter.

Things like radar for cruise control, and parking sensors, headlight washers, even the lights themselves may be LED. They may be very, very expensive. So, what looks like no damage, may be several thousand dollars of damage. And even if you don’t have any of these exotic options, on your car there are brackets and all kinds of plastic bits in behind all of this that get bent or broken and you can’t see them. 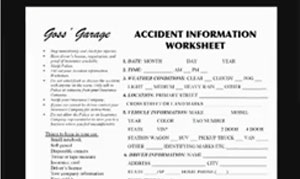 So, even though there doesn’t look like there’s damage. Make sure you follow the rules. The first thing in an accident is to stop, make sure there’s no injuries, and then proceed accordingly.

I made myself a check list so that if I’m involved in an accident, I just follow the checklist. Thing like making sure that you never admit any kind of responsibility. Don’t say “I’m sorry” or anything like that because that later could be construed to mean that you have admitted that you caused the accident when in reality you may not have.

Other things that you want to be aware of. Of course you want to call the police. The police will put that on record, because you want a record of what goes on. And then, get your cell phone out or some kind of a camera and take pictures of everything. The position of the cars. The damage that is evident on either car, skidmarks. Anything at all, and make note of the time of day and what the weather conditions were, and any signs or anything that may be posted or obscured by foliage or something like that.

This will help if you wind up in court. Remember that accidents that may not seem like anything at all can be blown up into something that is really major.

If you want the best protection, here’s something. This is from Swann. This is a dash cam. Dash cams will record all of this because they’re always running when you’re driving.

One thing about dash cams, though. Do not shut them down right after an accident. Because that may look like you shut it down to edit, or do something screwy with the video. So let it run continuously until everything is done with.

If you have a question or a comment, drop me a line. Right here, at MotorWeek.