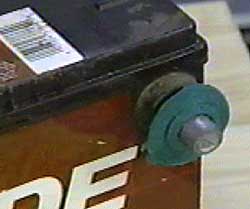 There isn’t much you can do with an automobile when it doesn’t have a battery, but batteries have some inherent problems. They have sulphuric acid in them, and sulphuric acid and the gases that come out of a battery can be very, very corrosive. So you want to make sure that you maintain your battery properly. That means keep the terminals clean. Use the battery terminal protectors to keep down corrosion. But more important, you’ve got to deal with the gases that come out of the battery.

One way to help minimize their damage is with a battery mat that goes under the battery. It neutralizes acid and corrosive gases. But here’s where lots of folks make a huge mistake.

Many batteries today have one of these covers on them, and sometimes they’re difficult to get back in position. So lots of folks Ð well, maybe even you have done it Ð you throw it away. Well, you know, how much could it mean? Well, it serves a couple of purposes. Number one, it protects the battery from heat that is generated under the hood of the car. That makes the battery last longer. But more importantly, most of these are going to channel the corrosive gases so they stay away from other components under the hood of the car. In this case, the fuse and relay panel is right behind the battery. You say, well, why do they do that? Well, they need to supply power into this, and the shorter the run to that panel, the less power loss there is. So it makes sense electrically. And they put one of these caps on here, these covers, and that keeps the corrosive gases away from it, but if you throw it away, guess what goes away? Connectors and everything in this fuse and relay panel, and it can be very expensive to repair. Don’t throw that cover away. It is important. 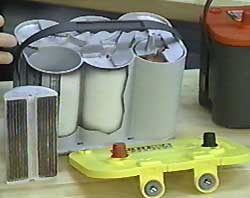 Now another thing that you can do, sooner or later your car will need a new battery. Well, there’s new technology. It’s called absorbent glass mat technology. It comes in different forms. One of the more popular is this OPTIMA battery which has spiral cells. It’s made in such a manner that the plates are actually wound in a circle. Well, this gives more power and it gives longer life out of the battery, but because of the nature of absorbent glass mat batteries, they don’t produce as much corrosive gas. So that makes them a good candidate whenever you’re replacing a battery and the battery is close to anything electrical or electronic.