After The Fender Bender

This is something that happens thousands of times across the country every day.  Two cars innocently bump together, the drivers get out, they look….and they, well, they don’t see any real damage, so, have a nice day, and they walk away from it.

Well, remember one thing: That the outside of the bumper, the part that you see, well, that is purely cosmetic on virtually all vehicles, and because it has a little dimple in it or something, you don’t think that that means anything. 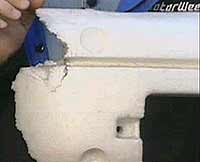 But you have to look deeper, because behind the bumper is going to be some form of energy absorber.  In this case it’s a piece of Styrofoam designed specifically to absorb the energy of impact.  Well, frequently, even though the cover is not damaged, the energy absorber will be damaged, and that means in a subsequent accident it won’t have the ability to absorb the energy that it should, which could lead to more severe damage to the car, and possibly to the occupants inside. 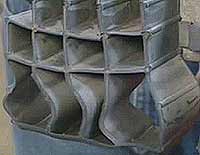 Now, there are different types of energy absorbers: the styrofoam is but one.  Here’s one where the manufacturer elected to use a honeycomb.  In this case, we see that the honeycomb is badly deformed and again it is useless.  So even in the most minor accident, you want to have a qualified technician look at the energy absorbing system to see if it’s been damaged, and if it has, it needs to be replaced.

Now, what about seatbelts?  Now, what would a seatbelt have to do with an accident, other than protecting you?  Well, there are different types of seatbelts in automobiles these days.  This type has a fold stitched into it, that under certain types of impact, the fold…the stitching opens up, and that means that it absorbs some energy.  Well, once these have been used, there is a yellow label inside that’s exposed.  If your seatbelt has one of these yellow labels on it that says “warning” or “danger,” that seatbelt needs to be replaced - it’s absolutely mandatory.

Now, on many automobiles these days, and they’re becoming much more popular, are the seatbelts that are built with a pyrotechnic charge that is ignited by a computer.  It’s called a pre-tensioning seatbelt, and before the airbag goes off, the computer ignites the charge… this tightens the seatbelt around your body, and protects you from moving in the seat. Now, the problem here is that you may not know that these have been consumed.  As a matter of fact, on some cars, they can even be triggered in a rear impact.  Now sometimes the seatbelt may not work at all, but other times it’ll work normally, and you don’t know that the charge is used up. Check it. Have a qualified technician check it, and if it has been used, you must replace it.