We hear a lot these days about hybrid technology, but what we’re seeing on the road, well that’s probably not what we’re going to be seeing in the future. And here to explain the future to us is Tom McMahon from WaveCrest Laboratories. Tom, welcome to Goss’ Garage. 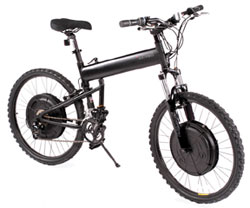 GOSS: All right, we have a bicycle. Tell us a little bit about this.

McMAHON: Well, it’s no ordinary bicycle. This is a TidalForce high performance mountain bike that we make at WaveCrest Laboratories. What we have here is the motor is in the rear hub, the battery pack is in the front hub, and it’s all controlled by the thumb throttle here on the handlebar. This motor goes one horsepower, which in turn will get to speeds of 20 to 30 miles an hour.

GOSS: And it has pretty good range, too.

McMAHON: It has good range, too. It’s 20 miles an hour—20 miles range on the setup that we have here. We also have an auxiliary battery pack that you can put on the rear rack of the bicycle that will extend the range to up to 40 miles.

GOSS: Now, this is military specification. Who uses it?

McMAHON: Well, we have special operations using this bicycle, the Marine Corps using this bike, as do police departments across the country.

GOSS: And it is available to individuals.

McMAHON: They can. We have dealers, 100 dealers all across the United States and Canada where anyone can buy this bicycle. And we have some other models as well if this type of mountain bike doesn’t suit your needs.

GOSS: But this is only the tip of the iceberg. Tell us a little bit about the car.

McMAHON: Well, this is our vision for the future, Pat. This is what we have our series hybrid technology that we’re using in this particular vehicle. The car we used is a Smart, but that’s just because it’s an eye-catching car and it was a rear-wheel-drive car to begin with. But we put the same technologies in the bicycle in the rear wheel of this car here. Instead of a 1 kilowatt motor, we have a 20 kilowatt motor in each of the rear wheels of the car here to give us 40 kilowatts of power. We also put the controls—it’s in the motor in the bicycle—but in the automobile here all the controls, the electronics, the batteries all fits in the trunk, where in this particular car the gasoline engine used to sit.

GOSS: All right, now, the real car, when it comes into production, will not be just batteries. It will have an engine that powers a generator like a locomotive.

McMAHON: Very much like a locomotive. In fact, we like to say with our system that we’re fuel agnostic. We can use any type of fuel. It can be gasoline, diesel, even in the long term we could use fuel cells, anything that will help us generate electricity. That electricity in turn will then be stored into the batteries, and then from the batteries it will go into the motors to make the motors turn and help you get down the road.

GOSS: And the motors themselves are considerably different than what we’re seeing in current hybrids.

McMAHON: Very different. We take our motors from underneath the hood of the car and put them into the wheels of the car. This particular car only has it in the rear wheels because of its size. Larger vehicles we put a motor in each of the vehicle’s wheels giving us four motors to propel the car down the road. So it’s quite a bit different than what you have now. It allows you to get a bigger car on the inside. It gives you better fuel efficiency as well.

GOSS: And range would be unlimited.

McMAHON: Range would be just as far as the car will take you. It just depends on what type of fuel you’re using to generate the electricity.

GOSS: Tom, thank you so much.