PAT GOSS: Lots of folks like to upgrade the sound systems in their car, and it may not be as difficult or as costly as you might think. And to explain that, we have Peter Logan from Crutchfield.

PAT: Good. Now, where do they start?

PETER: Well, when upgrading the sound system in your car, we usually recommend people start with getting a new radio first.

PAT: Not the speakers?

PETER: Not the speakers. Many people think when they turn up the volume, the speakers are distorting. Speakers don’t actually distort. They’re just reproducing what’s being sent to them from the radio.

PAT: All right. What are some of the features they should look for in the radio?

PETER: Some of the features you should look for are high power, as we mentioned. Also look for a detachable face for security. And it’s nice if it has a CD changer so it will give you the ability of upgrading down the road.

PAT: All right. Now, they’re going to install it. What are some of the pitfalls here? What do they need to look for?

PETER: Well, with most radios, we’re going to include some of the stuff you see here. It’s important to look for three things. One, you want to make sure that the equipment actually fits in your car. Two, we want to make sure that we have the proper mounting kits and wiring harnesses to integrate it with our vehicle. And three, detailed instructions are pretty important, as well.

PAT: Okay, so the wiring harness, for instance. What we’re seeing here would do away with having to cut into the wire harness in the car.

PAT: And no warranty problems. Then, as far as the instructions, your master sheet tells all the tools that are necessary and gives pictures and diagrams and instructions on how to remove things like door panels and dash panels.

PAT: Great. But sooner or later, we’re going to come down to speakers, right?

PETER: You’re going to have to replace the speakers sooner or later.

PAT: All right. Tell me about them. 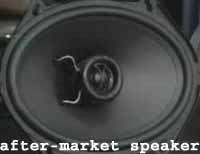 PETER: What we’re looking at here, here’s an example of a factory speaker. Now, it’s not a bad speaker, but it does feature a paper woofer. It features a foam surround, and something called a whizzer cone to reproduce high frequencies. It doesn’t have a lot of crispness and sparkle to it. Here’s an example of an after-market feature, speaker. It features a foam surround here, a polypropylene woofer, and it also features a dedicated tweeter for reproducing those high frequencies. It gives a lot of crispness and sparkle to the sound.

PETER: Unfortunately they don’t. In a car environment, there’s heat, there’s humidity, there’s sunlight. And after awhile, even if you replace your speakers, sometimes they end up looking like this. So, it’s a maintenance issue. 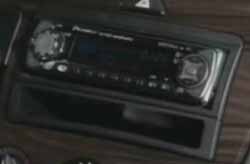 PAT: Right. All right, our Ford Focus behind us, what have we done here?

PETER: Well, what we’ve done here is give an example. We’ve actually installed a radio using one of our custom kits in the dash, and you can see that it enhances the appearance of the dash, it fits flush, it doesn’t stick out like a sore thumb. We’ve also removed the door panel to access the speakers in the Ford Focus, and it’s really not a big deal. Again, if you have the proper tools and the proper instructions, they come off pretty easily.

PETER: That’s what you’re supposed to do.

PAT: All right. What about this big…

PETER: Well, it is a pretty big thing here.

PAT: Okay. Well, it isn’t all that difficult, and it certainly isn’t all that expensive. If you have a question or a comment, write to me.  If I use your letter, I’ll send you a MotorWeek T- shirt.  The address is MotorWeek, Owings Mills, Maryland, 21117.