With the unexpected passing of Pat Goss recently, Motor Week not only lost a contributor, but a friend, a mentor and an irreplaceable pillar of our program. Now out of respect, we will be retiring the Goss’ Garage segment after our next episode. So with his final words of car care wisdom Pat Goss shows us how to keep your car powered up for the road ahead. 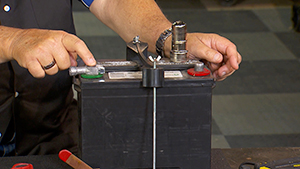 PAT GOSS: Batteries are one of the most important parts of any modern vehicle. And that’s because cars have become very electrified. They have computers all over the place, even the steering on many models, well it’s electric, it’s no longer hydraulic. So, all of that. all of that electricity begins and ends right here at the battery. So we want to take good care of it.

First thing that we want, is that we want a good electrical connection between the battery post and the battery cables. See, the inside of the end of this cable would be clean, the outside of the post needs to be clean so that the electrical connection is good. One way to do that is to follow procedure, remove the negative battery cable first, always, and then follow the proper procedure from there. But, the tool you want? Right here, this is a battery terminal brush. It has this round one that fits over the outside of the battery post to scrub it clean…got little wires in there. On the other side of it, we take the cover off and there we have a brush that fits up inside the battery cable… to clean it. Now, before we put all of this back together, we want to buy some of these treated battery pads.  They go around the post and they help prevent corrosion. They’re inexpensive and they do a good job. 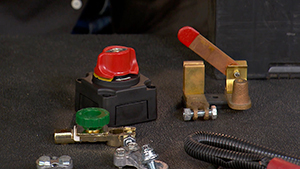 Now, in addition to that, batteries are held in place, they’re held in place by what’s called a battery hold-down. They come in different forms and so on…this is one of the more typical ones – fits over the top of the battery, locks the battery firmly in place.  Now some people will tell you: ‘Oh gee, you don’t need that.” That is not true. Batteries bouncing around under the hood, yeah, they do bounce around… all of that force that can jostle your car up and down, certainly can jostle a battery up and down. That frequently cracks the case, then you have battery acid, leaking out under the hood of your car. Or worse yet, the battery falls out of its holder, into the mechanical things that are moving around under there, it gets all chopped and you’ve got a real mess.

Ok, suppose you’ve got a car that isn’t going to be used for a period of time. Well, you may want to put a battery disconnect on it. They have all different types: Ones that use a knob to turn them like that, here’s one that’s just a switch, another switch… old-fashioned type, works well though, does the job. Or you might want to consider a battery maintainer. That will act just like the charging system in your car to keep the battery at a full state of charge all the time, without overcharging it. Take care of the battery and you’ll save yourself a lot of grief and dollars over the life of your vehicle.