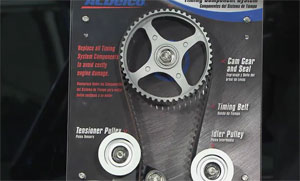 For any engine to run, he have to have a way to open the intake and exhaust valves. And that’s done with a cam shaft, or multiple cam shafts. Now we have to have a way to make those cam shafts turn. Well that’s done by connecting the crank shaft of the engine to the cam shafts by a chain or a belt. Used to be chains, then it went to belts for 30 or 40 years, and now they’re going back the chains. But that means that there are tens of millions of cars on the road with timing belts.

Now there’s a rule with timing belts: do not cheat when it comes time to replace them. You see, a lot of engines, if the timing belt slips or fails, it can damage or destroy the entire engine. So you gotta pay attention to what the owner’s manual says. Most manuals have time or mileage; whichever comes first. Not which comes last. So I it says that you have to do it at 90,000 miles or 5 years, whichever one comes up, do it. The other thing is that when it does come time to replace the timing belt, there are a lot of other parts that work in conjunction with the belt. Such as the water pump; there are idlers, tensioners, various things like that. There’s also oil seals and so on. You’d be money ahead if you have your shop install a timing belt kit. It comes with all of the wear parts, and you don’t have to come back for duplicate labor. Good way to save money. 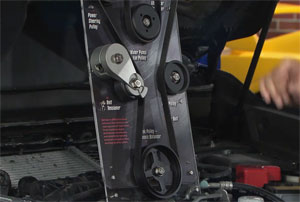 Alright, now we have a second belt on the engine. That is the serpentine belt. It runs the power steering, the water pump in some cars, the alternator. Different things like that. Now in this case, it’s driven off of a crank shaft pulley that is usually larger than any of the other pulleys, so all of these pulleys are over driven. In other words, they have more use on them than the engine does. So when it comes time to replace the serpentine belt, check all of these accessories, and don’t be surprised if you find that you need a new tensioner and a new idler at the same time. Again, it’ll save you money in the long run.

And if you have a question or a comment, drop me a line right here at MotorWeek.