With the reliability of today’s cars, do we really need to keep checking belts and hoses all the time?

If you think there’s any part of your car that will last forever, you are wrong. You see, every part of every car ever made will wear out if it’s kept in service long enough; that’s one of the laws of physics. Anyway, the things you have to be really concerned about are things that may mislead you and that’s typically going to be the rubber parts underneath the hood of the car – belts and hoses. You see, belts and hoses have changed over the years; we now have serpentine belts like this – one great big long belt that drives all of the accessories on the front of the engine. Well, they’re big, they’re wide, they’re expensive and they replace the old fashioned V belts like we have here. 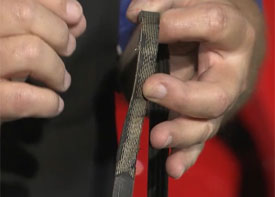 Now, the second thing is that these parts are all covered in cosmetic; and that’s the key, cosmetic rubber. Because the parts that do the work are underneath the rubber that you can see. There are fabric reinforcement layers under the rubber in a belt or a hose under the hood of your car. And it’s that fabric that wears out over time, it weakens; and when it weakens, you can be in trouble. See, on a hose, for instance, this hose right here looks pretty good till we look up here and we see that it has had a catastrophic failure. In this case, it let all of the coolant out of the engine, rapidly; the temperature gauge did not work as a result of no coolant in the system, and the engine was destroyed – very expensive problem there. 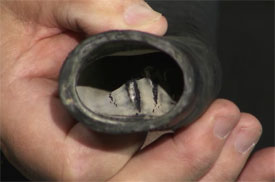 So, what are you looking at? Well, you hope to see, I guess, something like this that’s very, very obvious. The hose is very swollen up, but you’re not always going to see that. Here again, we have a hose that looks to be practically like new. But down here, if we squeeze the end of it, look inside it, the inside is all breaking apart. This is a disaster looking for a place to happen. So what do you do?

Well, you replace the belts or hoses based on mileage – 5 years or 75,000 miles, whichever comes first. Now, here’s where you might be in for a bit of a shock – a lot of these newer belts and hoses, they’re complex assemblies, and they are expensive. Ok, that’s a consideration, but, remember that belts and hoses are never, anywheres near as expensive as the engine they’re going to damage when they fail. If you have a question or comment, write to me, right here at MotorWeek.