There’s some real issues on the highways these days between the drivers of passenger cars and the drivers of the big rigs, and here to explain some of the things that can make driving safer for those, well, for both parties, Bill Adams. He’s a long-haul trucker driving for Overnite. Bill, welcome to Goss’ Garage.

ADAMS: Thank you for having us.

GOSS: All right. What are the major things that you see that car drivers do wrong?

ADAMS: A lot of our problem with trucks and cars on the highway is a lack of education between the two. People don’t realize about our large blind spots around the tractor trailers. They don’t realize that it takes us the length of a football field to stop a fully loaded tractor, because 3,200 pounds for your average car versus we’re up to 80,000 pounds for the tractor trailer. But with a little bit of intermingling between the two of us and passing some facts between the two of us, we can make the highways a whole lot safer. 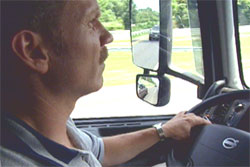 GOSS: Okay, now mirrors. We’ve been told forever that if you can see the mirrors on the truck, then the driver can see you, but that’s not really true is it?

ADAMS: No. If you can’t see the driver’s face in the rearview mirror, then that driver’s not seeing you. We can’t do like you do in a car and turn and look out the side window, because we’re looking at the bedroom of the truck. We’re dependent on our mirrors, and we have large blind spots on all sides of the tractor trailer, both front, both sides of the truck, and the rear of the trailer, and people don’t realize they’re there. 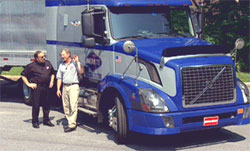 The largest one is the one that we’re standing in front of right now. It starts out at the back of the cab, goes the length of our trailers, and can be as wide as three lanes, and when you’re in it, we can’t see you. I’ll see you coming into the blind spot, but if you disappear and linger there, if something happens and I’ve got to make an emergency reaction and you’ve been lingering in that blind spot, if I forgot you’re there I’m probably going to change into that lane. So we ask people if you’re passing us to pass us and get it done, and once you get in front of the truck, make sure that you can see both of my headlights in your rearview mirror. When you come back into my lane, that will give me a little bit of cushion of safety so that if something happens or goes wrong with you, I’ve got time to react so that I don’t hit you.

GOSS: And what about following a big rig?

ADAMS: When you’re following a big rig, we ask on the interstate when you’re out of the city to try to stay back 20 to 25 car lengths. You want as big a gap between the two of us in the city or on the interstate. If you’re following us too close in the city, if the light that I’m coming through is green, until my trailer gets through it’s probably going to be yellow, and if you’re tailgating me you won’t be able to see that light change. But also if you’re trying to read street signs or overhead interstate signs, if you’re following me too close, you can’t see those signs. So just give yourself that safety cushion so if anything goes wrong, you’ve got plenty of time to react.

GOSS: Now, Bill, you have over two million miles without an accident.

GOSS: That’s a real accomplishment. Bill, thank you so much for joining us. And hopefully this will make things safer for everybody out there.