And here to give us some pointers, we have Tom Taylor, who is an online parts supplier. Tom, welcome to Goss’ Garage.

PAT GOSS: Alright, what are you seeing as a trend right now?

TOM TAYLOR: Well, something that’s been on new cars since 2008 is Tire Pressure Monitoring Systems, or TPMS. And each wheel has a sensor that most people don’t know has a battery inside. The manufacturers suggest the batteries last three to seven years, and then the whole sensor needs to be replaced. You can’t just take out the battery. So we are selling a lot of these TPMS sensors.

PAT GOSS: Okay, and we’ve got millions and millions of cars where they’re going to be failing very soon now. Alright now, you have a couple of different types here. 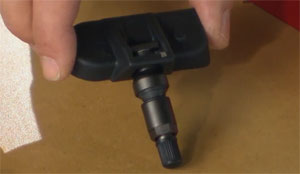 TOM TAYLOR: Yes, there’s a strap. It kind of straps onto the center of the wheel…the sensor connects on the strap and you bolt it on. And this is the much more common sensor that goes to the valve hole in the wheel. This type of sensor can actually often be replaced with this easier type.

TOM TAYLOR: Yes, similar to a conventional tire that you find on an older car, you can replace the inside of the valve…the seal and the guts of the valve. You might do that between replacing the whole sensor.

PAT GOSS: Okay.  Alright, now over here we have one actually mounted into a wheel. This is what it looks like inside. But, once the light comes on on a lot of these cars, you may have to have a special tool in order to reset them. 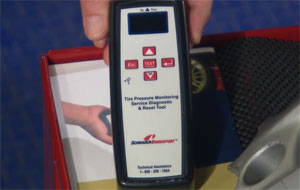 TOM TAYLOR: Right.  It varies from different makes and models. Some it’s as simple as going for a short drive or turning on the car. But with other cars, you need to have a tool to recognize the make and model of the car and relearn the sensor so the computer knows it’s there and what wheel it’s on.

PAT GOSS: Okay, now, some of these can actually read the state of charge of the batteries in the sensors.

TOM TAYLOR: Right, that’s a handy thing for tire shops…that they can show the customer that the battery is getting close to the end of its life, so the customer avoids taking off taking off their new tires and installing new sensors a few months down the road.

PAT GOSS: Well, when you look at that three months later, you take the tires off and put sensors in and so on…the demounting, remounting, rebalancing, and all of that…that could a hundred, a hundred-fifty bucks savings just by doing it all at once.

TOM TAYLOR: Right. Now, mentioning costs, replacing four sensors can be more than two hundred dollars, so it is something to plan for at that second or third tire change.

PAT GOSS: But plan for it, just like you plan for new tires and new brakes.

PAT GOSS: Okay, Tom. Thank you. And if you have a question or comment, drop me a line, right here at MotorWeek.