Pat Goss: There’s a new problem that’s affecting drivers, and it’s almost an epidemic. And that is catalytic converter theft. And here to give us some pointers, we have Tom Taylor, our online parts guru. Tom, welcome back to Goss’ Garage.

Tom Taylor: Thanks for having me, Pat. 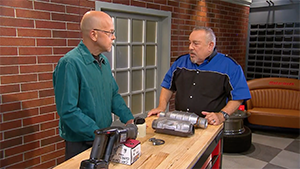 Pat Goss: Absolutely. Catalytic converters are being stolen right and left around here and I think it’s a national thing.

Tom Taylor: It used to just be vehicles that are high off the ground, pickups and vans, where they can easily crawl under there with a saw and hack it off, bit now a lot of the hybrids have more precious metals in the catalytic converters.. the platinum, palladium, rhodium, so it’s a lot more, the thieves get more for the stolen catalytic converter, and they figured out how to wiggle under these really low-slung vehicles to either saw off the catalytic converter or commonly now, they use a pipe cutter, that’s kind of a sharpened piece of chain that you  just spin around the pipe to cut through it.

Pat Goss: Well, they’ll figure a way around just about anything. Um, any practical way to slow them down?

Tom Taylor: Yeah, there’s companies that sell elaborate shields to bolt on to specific vehicles. An idea I like is just take simple pipe clamps and festoon the pipe around the catalytic converter, where thieves have access to the bare pipe, with those, and its like porcupine bumps, its harder getting a saw or one of those chain pipe cutters on it.

Pat Goss: Oh, very good idea. I’ll have to recommend that to some of my clients. OK, um, so you’re seeing an increase in the sales of converters. 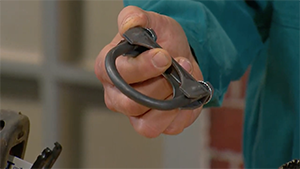 Pat Goss: Yeah, we’re seeing that with some of the, our fleet customers.. some of their older vans and so on, they do so much damage cutting these things off, that the insurance companies just total them and take them to auction.

Tom Taylor: Yeah, it’s such a waste to destroy a vehicle that has more miles on it, for something as dumb as this.

Tom Taylor: Just always thinking of how to make it harder for the thieves, so park over those mud puddles, it’s like locking your car or your house, make it a little but harder and they’ll try to find an easier victim.

Pat Goss: There you go. Tom, thank you so much. And if you have a question or a comment, drop me a line, right here at MotorWeek.