This time we have some tips on how to do a better job buying that collector car. And to give us some help, we have Tony Fleming, who has bought thousands of these cars over the years. Tony, welcome to Goss’ Garage. 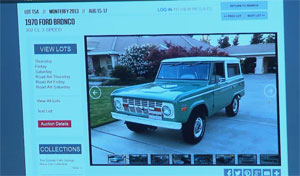 PAT: Alright, now here we have a picture of this Bronco that we’re standing beside. That picture was in an ad. Is that the ultimate? I mean is that the way we buy the car? From that picture?

TONY: Well I don’t think that the picture is going to be enough. First off, if you’re going to buy a car from pictures, there are some things you can do additionally. First off, the question I would ask is, “when were the pictures taken?” A lot of times, people will send you pictures of when they purchased the car, maybe 20 years ago.

PAT: Ok. Alright, now, some of the things that we’re going to see…or not see there…are items like we have here on this fender, where there’s a buff through. The fender looks fine in the picture. Now how would you discover this sort of thing, if you buying the car out of state?

TONY: Well you really only have a couple of choices at this point. You can get on a plane, fly out there, look at the car yourself, check it over; and if you’re an expert, or you feel like you’re good enough, you can make your purchase decision then. Or if you want to add to that layer, you would hire a third party inspection. You might want to ask the buyer-I mean the seller-before you even get there, “do you mind if we engage a third party to look at the vehicle; just for…check it over first?”

PAT: Ok. And if they say, “no” about the third party, just walk away? 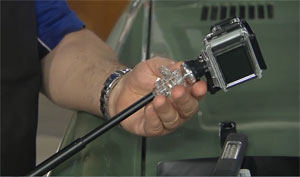 PAT: Alright…Ok, now some of the things that you can do yourself…I mean you can look at various things…a couple of the things that I’ve used over the years is a simple mirror, like so, and you take a light and shine it into the mirror and hold it up underneath the fender and so on…you can see a lot of things, but still in all, I don’t think it’s the end all be all. Now here we have a GoPro on the end of a selfie stick. Well that can get up underneath the car, and you’d have a permanent record that way. But still in all, the one thing is the third party.

PAT: Now Tony what should we expect to pay for this third party exam?

TONY: You know, that depends. People have different levels of that. But in between 3 and 500 dollars is typical. What that will give you is, say, 50 digital pictures, it’ll give you a nice write up on the car, of things that work. Turn signals, headlights, things that you forget to ask about, right? Because those are expensive items to fix later on. And it should give you a test drive.

TONY: For sure, and if you do that, you’ve done way more than 90 percent of the people that buy cars.

TONY: For sure. Exactly.