A check engine light can be a royal pain. And for those of you who think you can go out and buy a scan tool, whether it’s a basic one or a professional one, and that you’re going to read coded, and replace a part and solve a problem…well you may be in for a big surprise. 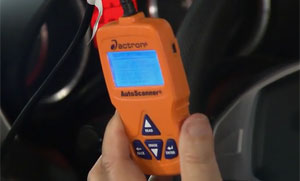 You see, codes don’t actually tell you what to replace. That notion comes from dealership technicians and so on who are bound by the manufacturer to do it that way. See, manufacturers don’t like to pay for diagnostic time, so they tell their techs in most cases to read the code and replace the part that’s described in that code. Well, for you, that doesn’t work because you have to pay for this. The fact of the matter is that you read the code, then you go to a service manual, and for each code, there is a matching test procedure. In other words, if we had say a code PO300, well for PO300, which is a random misfire code, you have “test PO300”. And that test will go through all of the steps to isolate each one of the things that could cause that code. And by process of elimination what you wind up with is a real part.

Now if you’re just going to read code and replace parts, there’s a better way to go about it. And that is to buy yourself a Magic Eight Ball, ask it what the answer is. Because it’s going to be cheaper than the scanner. And you’re probably going to get similar results.