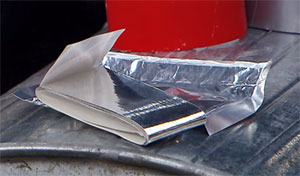 Now I know none of you would do these things but we see some pretty crazy stuff coming into the repair shops. One of the more typical ones is where the exhaust system has a leak and the driver goes out and buys duck tape or some other type of tape and wraps it around the leaking part and expects it to stop the leak. Well it may momentarily, but remember exhaust systems are hot these things melt. Sometimes they catch on fire. You’d be lucky if you don’t burn your car to the ground.

What you could do for a leak is to go to an auto parts store and buy one of these temporary repair kits. They actually work temporarily.

Another thing we see on exhaust systems is the hangers that hold the exhaust system in place… they break. And people try all kinds of things from coated wires to tie wraps to lamp cords and computer cables electrical tape you name it all these things. Well they all have coatings that can catch fire. They all make a horrible stink inside the car when they do catch fire and again you’d be lucky if you don’t burn your car to the ground. What could you do? Well you could use a coat hanger or mechanics wire temporarily to get to a repair shop. 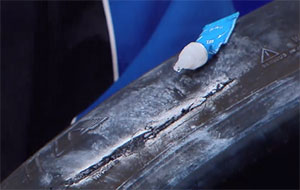 Alright, one we saw recently was where this guy hit something in the road gauged a great big chunk of rubber out of the side of his tire was just hanging there by a thread he asked us if we could fix it. We told him no he needed a new tire. Well he had apparently seen some commercial that said there was some glue out there that would hold anything including support an elephant for 6 months or some such thing, anyway he goes and buys some of this stuff he comes back he puts it down into this gash in the side of the tire holds this flap of rubber in place until it dried and said ah I fixed it. He put air in the tire, headed off, made it about a block and the tire self-destructed. You don’t glue tires back together folks. It doesn’t work.