Older cars and newer ethanol gas. Is that a devilish mixture or a match made in heaven?

As our automobiles have evolved, so have the fuels we use to power them. More specifically, fuels today have ethanol in them; the typical one is E10 which is 10% ethanol. But there’s also E85 which is 85% ethanol. The basic rule is E10 is ok for everything, but E85 can only be used safely in cars that are FlexFuel compatible. So unless you have a FlexFuel vehicle, don’t use E85. Now, along with the changes in fuels, the myths abound; the internet is full of these dire warnings about what’s going to happen to our older, collectible and classic automobiles if we put E10 in them. Well, they talk about engine failures and all sorts of things like that. Isn’t going to happen folks; yes, there may be some minor problems but they’re easily corrected. 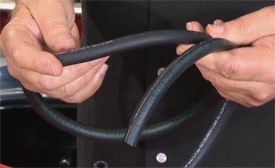 The first thing that you might encounter is at the first use of a fuel containing ethanol because ethanol is a strong cleaner, it can clean away years of dirt, which can plug the fuel filter and can give you some performance problems. Change the filter, problem gone. Also, inside a lot of carburetors, there’s going to be leather parts, there may be some metal or plastic parts that are not compatible with the 10% ethanol. But in those cases, it’s probably going to be a long term degradation of performance and it’s going to be easy to correct; you just replace the part with a modern part that is ethanol compatible – things like fuel hoses and so on. Sooner or later, all of these parts either have to be updated , rebuilt or replaced. When you do that, simply make sure that what you use is ethanol compatible and you’ll never have a problem again.

But one place where you can have a problem that a lot of the miracle products out there that claim to do away with ethanol or to repair ethanol-related problems and so on. Well, many of these are nothing more than snake oil so be very careful. So common sense is the word of the day when it comes to using E10 fuels. And if you have a question or comment, drop me a line right here at MotorWeek.