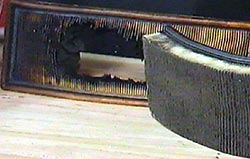 Although cars have changed dramatically over the years, the basics have remained the same. Take the air filter, for instance. You need to check it on a regular basis, and please replace it long before it looks like either one of these. That could be very damaging to the engine.

Also you may have a filter on your car that you don’t even know about, a cabin air filter. It filters all of the air that comes into the inside of the car. It removes pollen and dust and dirt and so on. Refer to your owner’s manual to see when to check and how to check and replace as necessary. 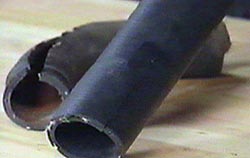 Now rubber parts, they still deteriorate just like they always did. Now that means that hoses, the radiator and heater hoses, they need to be replaced at four years or 60,000 miles, time or mileage, whichever comes first. Now lots of folks make a drastic mistake, and that is they look at the outside of the hose, which is purely cosmetic, and they say, oh, this hose is great. Well, you can’t tell anything by looking at the outside of the hose, because even if it looks good, the strengthening part, the fabric inside it, may be seriously deteriorated. So four years or 60,000 miles. And if you have cooling system problems where the car gets dirty in the radiator and so on, well you may also need to replace the hoses as a result of that because it can do a lot of damage to the hoses.

And here’s another type of hose that your car has. It’s a PCV hose, positive crankcase ventilation hose. They tend to deteriorate over time, and when they collapse, you may have a situation where you damage seals in the engine or all kinds of nasty stuff. So check those yearly and replace as necessary. 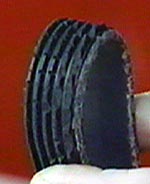 All right, belts we used to call them fan belts they’re now referred to as drive belts. You have to look at those on a regular basis. When you start seeing cracks on here like we have on this one, replace the drive belt. Now, if it doesn’t show with cracks before four years or 60,000 miles, you replace it anyway.

Also if the edge of the belt becomes frayed, that usually means that the pulleys on the car are misaligned. That’s a relatively common problem. And it has been a real problem trying to diagnose until just recently when Gates Rubber Company came up with this laser unit to check belt alignment. What you do is you put it on one of the pulleys and you aim it toward an adjacent pulley. The little laser beam tells you whether or not the pulleys are properly aligned. A really slick tool. It saves a lot of labor.