Over the last few years it’s seems like there’s been one intense storm after another. And that means that there are a lot of flood cars. And here to give us some pointers, we have Chris Basso from CarFax. Chris, welcome to Goss’ Garage.

PG: Alright, now what kind of numbers are we looking at, as far as flood cars are concerned.

CB: We’re talking about a quarter of a million cars from previous storms that are back on the road. And those are spread out over every state in the country. So there is no place that is immune to these flood cars ending up. And for people that are out buying a used car, flood damage is a big concern. So there’s two places that you want to look to spot a flooded car: that’s a CarFax report, and on the inside of the vehicle. 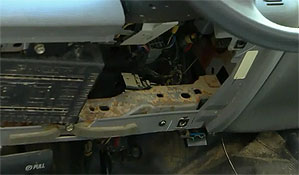 PG: Alright, now what’re YOU looking at on the inside of the car?

CB: Specifically, the metal that’s on the inside of the car. The seat rails, nuts and bolts, the seatbelts. Water gets in there, those metal parts can rust prematurely, which could be a sign that that car was once under water in a flood. Second place is underneath the dashboard. The wires under there, when they get wet and dry out, can get brittle and crack. And if you see that happening to the wires, another sign that that car could have been under water in a flood.

PG: Alright, now as a failsafe, one of the thing’s I think would be a great idea is to take it to a pro and have in thoroughly checked up on a lift. 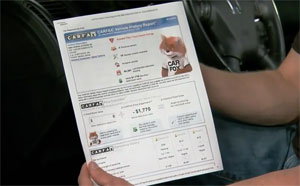 CB: You definitely want to consult the experts like CarFax and a mechanic before you buy any used car. Especially if you are worried about flood damage. A CarFax report contains information about flood damage reported by State Department of Motor Vehicles, and the trained eye of a mechanic can spot those hidden signs of damage that…may not have been reported to anybody.

PG: Yea, because some people figure out ways to circumvent things. It’s crooked, but they do it.

CB: Yea, and these flooded cars can be easily cleaned up, cosmetically, to look like any used car that’s on the road. And it’s inevitable that some people will get duped into buying a flooded car, with so many flood cars that are back on the road.

PG: Okay. Chris, thank you. And if you have a question or a comment, drop me a line right here at MotorWeek.