With all this crazy weather that we’ve been having there are tons of flood damaged cars on the market. And to give us some pointers we have Chris Basso from Carfax. Welcome to the show, Chris.

PAT GOSS: Alright, how many flood damaged cars do you know of at this point?

CHRIS BASSO: There’s over 200,000 flood cars that are on the road across the country right now. And that’s a lot of opportunity for you to wind up with one of these cars in your driveway without you knowing. You don’t want to have that happen because these flood cars, literally, rot from the inside out.

PAT GOSS: Yeah but you say not knowing. Most everybody that goes out and looks at a car says ‘I could tell if it’s been in a flood,’ and that’s not really true.

CHRIS BASSO: It’s not and that’s the problem with flood cars. They show little signs of physical damage which makes it easy for conmen to clean them up, move around the country, and resell them. This car, we rescued from New York in Hurricane Sandy and in less than half the day we made this waterlogged wreck look like any other used car on the road. 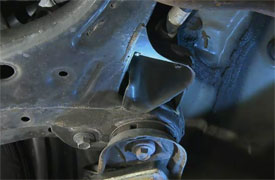 CHRIS BASSO: No, you can’t and that’s why it’s important to start with a Carfax report and look for reported flood damage in the report. But you should also take that next step and get it inspected by a qualified, trusted mechanic.

PAT GOSS: Technician’s going to raise it up in the air, because that’s one of the critical parts. So let’s raise your car up in the air and take a good at it.

PAT GOSS: Chris, now that we have the car up in the air it’s time to start looking for things that might indicate flood damage. In my shop, when we’re checking a car like this, we start looking up above things and in between pieces of metal. Are there cracks and so on that debris can collect in? And that gives you a pretty good idea.

CHRIS BASSO: These cars look great on the surface but it’s not until you get up inside and really check for signs of flood damage can you tell that the car was once under water. That’s why it’s so important to consult the experts like Carfax or a mechanic so they can spot the signs of flood damage which may not be as obvious to the untrained eye.

PAT GOSS: Thank you. And if you have a question or comment, drop me a line. Right here at MotorWeek.