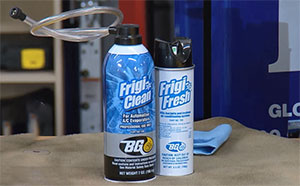 Ah there’s nothing like that new car smell. But in many cases that new car smell gives way to some rather pungent odors. Not the least of which is the one which smells like dirty sweat socks. Well that could indicate that you have a leaky sunroof if your car has one.

So you want to start out by looking at the drains in the sunroof. No, they’re not waterproof. So water gets into them and has to drain out into the inside of the car. Another thing there is that you may find that you have wet carpet due to a number of different things. You want to make sure on that, you take a dry paper towel, put it down into the carpet and push down into it like so.

Whoa. We have wet carpeting which stinks. You’ve got to find the source. Another thing that can create that kind of source is air conditioning. It’s moist. Mold. Mildew and all sorts of stuff grows around the air duct in the air conditioning. So you may need products like these to eliminate the mold and deodorize the system. 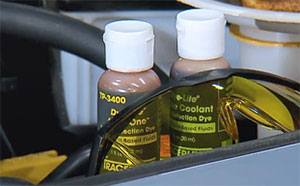 Next is a rotten egg smell. That usually means something is not right with the catalytic converter. Not necessarily the converted itself but maybe a tune up issue or a leaky fuel injector or something like that. But it gives you an idea of where you want to look. And pay close attention to leaky fuel injectors for that one. 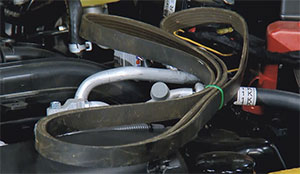 But the dye goes in, it’s run for a few minutes. Then you use special glasses and a black light and you can see traces of the dye because it glows. And that tells you where your leak is. Next is burning rubber smell. And the first thing you think of is that you have a problem with the drive belt of the serpentine belt. Something has seized up or slipping and its heating the rubber up.

And you have an issue, you have a burning rubber smell. By the way, if you have a teenager, It may have nothing to do with the car at all. Because stuff like this well the teenager could be doing burnouts so you want to check that out. And if you have a question or a comment, how about dropping me a line. Right here at MotorWeek.