Today we have a very special guest here at the show. We have Gale Banks. It’s been a lot of years. Gale, welcome back to Goss’ Garage.

GALE BANKS: It’s a pleasure to be here, Pat.

GALE BANKS: It was.

PAT GOSS: Well, the time has flown by. And you’re still in the diesel modification business. Doing all the things that you’ve…

GALE BANKS: We are, and we also sell new diesel engines. We represent GM with the Duramax. And we have a little V6 from Italy, the Motori.

PAT GOSS: So, what has changed, primarily, as far as the diesel market is concerned?

GALE BANKS: The control of the engine. Electronics. Now, it’s like you have a God’s eye view of the engine; of engine management.

GALE BANKS: it used to be purely mechanical. The way we modify them; you know, the low restriction intake air, the low restriction exhaust system, the bigger intercoolers. Those things, we do. And we do well. But I really pride myself on the fact that we’re in the electronics business.

PAT GOSS: I see. And speaking of electronics: You have a new program that even applies to gas engines, I understand. 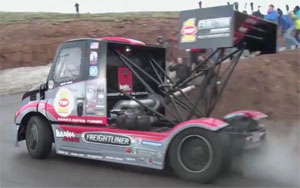 GALE BANKS: Yea. We’re into methanol injection. It’s not a new idea. But the way we control it, is completely new. And most people have used it in the past for just pure power. We’re currently working on a Pike’s Peak project, which is a freightliner; Detroit diesel powered, 10,000 pound race truck we’re taking up Pike’s Peak. It’s 2,400 horsepower! And we’re adding another 400 just with the methanol.

GALE BANKS: Yea. So it’s powerful stuff, but you can reduce emissions and improve fuel efficiency with it as well.

GALE BANKS: Yea. If you’re into the environmental movement, and I am, that’s the component I always like to have. And any of our products: it’s got to be clean.

PAT GOSS: Ok, so we’ve got the best of all worlds. Now that also has some other features you can add into it? 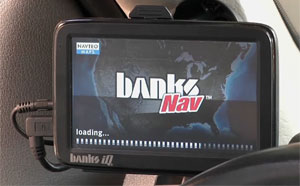 GALE BANKS: Well basically, I’ve got an overlying thing; which is this five inch screen which goes over the dash. I call it the Banks IQ. This is the command and control center for things such as water/meth, exhaust braking, your vehicle performance. You can re-flash the ECU; put a new program in the ECU through this. You control the water/meth system, or anything that’s going on. It’s also a diagnostics tool. So, backup camera, hands-free phone, we’ve even got Banks Nav.

PAT GOSS: Gotcha. Well Gale, thank you so much for joining us. And if you have a question or a comment, drop me a line, right here, at MotorWeek.