On the front of an engine, down on the end of the crankshaft, at the very bottom of the engine, is a pulley. Now, those pulleys may be single purpose, and maybe drive the belt for the accessories and so on, or they may be dual purpose and not only drive the belt, but dampen vibrations from the engine. Now, to give us some pointers, Tom Taylor who is an online parts expert. Tom, welcome to Goss’ Garage. 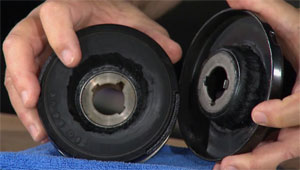 PAT: Ok. Here we have some harmonic balancers. Or dampeners as you may call them. And this one in particular, it literally came apart.

TOM: Right. On certain engines, sometimes these last forever, last the life of the engine. And certain engines they might only last 50,000 miles or less than 10 years. This is a good example – because it’s got such a massive piece of rubber – you can see the rubber literally tears apart into two sections. The other style of dampener is like this: where you still have that strip of rubber, but it’s much thinner. It’s hard to see on a black-on-black part.

PAT: Now one thing about this…if you look at the way this is constructed: you have the center hub which is driven by the crankshaft, and that exerts force on this rubber, which in turn exerts force on the part that drives the belt. So there’s a lot of tension on that rubber.

TOM: Right, Right. Every time you turn on or off the air conditioner, the belt gives a jerk, and it goes right to the rubber. 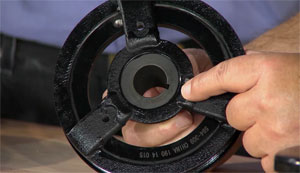 PAT: Now I’ve noticed on some of the newer cars, what we’re seeing is this configuration: where the crankshaft drives the pulley directly, this web comes right out here to the outside, and then the balancing portion of it, which again is mounted in rubber, is inside, and it’s just like a wheel weight on a tire.

PAT: Ok, now you find quite of few of these that fail. You sell a lot of them.

TOM: Right, like I said certain makes and models and years, they go through them very quickly. The aftermarket ones are often better than the originals. When they fail, it can be a horrific sound coming from the engine. All that vibration or dampening from the crankshaft doesn’t get dampened anymore, so it might sound like a 1980s diesel that is falling apart, even though it’s a gasoline engine.

PAT: Now what we see in the repair shop is oil leaks. And oil gets on this. And rubber and oil are not compatible. So this swells up, and everything comes apart, and you get a horrific noise out of it.

PAT: So I guess one of the things, as a driver, if you get this obnoxious noise under the hood and somebody condemns the engine…make sure that they have checked the balancer.

TOM: Right. It’s not that expensive, compared to…especially compared to a new engine.

TOM: And when you’re working on the car, if some other reason you need to pull this off, most of them require a special tool so you pull it off evenly and don’t apply too much torque one way or the other and damage it.