Now that the outside of our Wagoneer is almost completed its time to move inside and make that are more hospitable and modern. 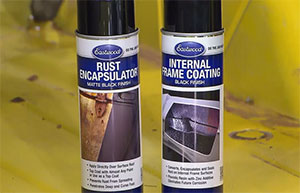 Then, the next thing we’re going to do… the inside of older vehicles they were hot they were noisy and so on. Well, we’re going to use and heat and sound barrier coating to coat the inside of this vehicle so we can get down into the areas where there are two pieces of metal that are close together we want to try to seal those off so dirt can’t collect in there and that will help prevent future rust problems. 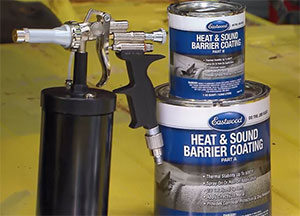 Next thing, over there we have some of the original sound deadening and heat barrier material that came with the vehicle, which was fine in its day, but its day has come and gone. What we’re going to replace it with is X-mat. Now all of these products are from Eastwood Tools. Now what we’re going to do with this is if you look at it it has a rubberized backing on it and then a foil coating. You peel the backing off, cut this stuff to size first, peel the backing off stick it to the floor or siding panels wherever you want it to do its job. And the overall effect of this is going to be much more like a modern car because this is going to help keep the temperature down and the noise levels down.

If you plan your interior and pay attention to the details you’ll have a comfortable nice interior for a lot of years to come. And if you have a question or comment drop me a line right here at Motorweek.