I Can See Clearly Now

In order to be a safe driver, you have to be able to see. That means you need clean windows on your car. Well, we found wipes from Griot’s Garage. They’re treated with a special chemical that helps cut the film that builds up on the inside of the glass. They can be used inside or outside, and they do away with a lot of the streaking that’s so common. 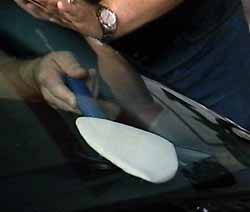 Now that’s a good product, but here’s something that I think is really exceptional. This tool is designed so that it can be used to get those hard to reach places on the inside, or even on the outside, of the windshield. It has this flexible pad that has a bonnet. Actually there are multiple bonnets that come with it. And what you do is use the appropriate bonnet, and then you can reach clear down into the bottom of the glass where it is so difficult to get your hand. Minivans and sport-utes and so on where they’re real tall on the outside, you can reach the center of the windshield. I think that’s very clever. 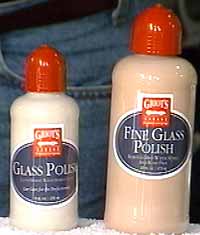 Now, as you drive, you’re going to build a film on the windshield, and it seems to be next to impossible to get off sometimes. Well, not anymore. Griot’s again have a glass polish. There’s a fine and a coarse, and you can actually polish this film off of the outside of the windshield so that your wipers don’t streak and it doesn’t leave those little spots on the glass. Speaking of spots, it works good at getting rid of water spots on the glass, too. 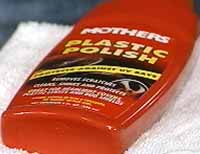 Now, headlights. Since they have allowed designers to make headlamps as an integral part of the design of the automobile, most of them are made out of plastic, and over time a lot of them will get kind of a crackled looking finish to them. And that cuts down on the light that they produce. Well, the majority of them can be salvaged instead of replacing them, which can be expensive, if you use a product like this Mothers plastic polish. You simply polish the plastic on the outside of the headlamps, and they’re clear again , good visibility.

If you have a question or comment, write to me.  The address is: MotorWeek, Owings Mills, MD, 21117.