John Davis: Welcome to another exciting day at Goss’ Garage! 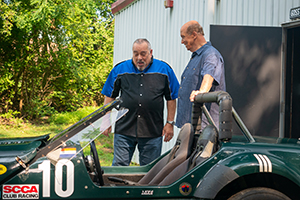 John Davis: We’ve got a little surprise for you Pat, something that’s been 30 years in the making.

John Davis: Come on, we’ve got it all planned out. You and the Maxton are up for a huge reunion! And you’re going to get this baby going again.

Pat Goss: John, I remember back in the day when we actually built this car, we did a 5-part series on putting it together and making it what it is.

John Davis: That was really the first time that I had ever been involved in essentially building a car.. this was a component car at the time. You got the body, you got the chassis, but you basically put it together yourself.

Pat Goss: Oh yeah, I remember the wiring in this..it was a nightmare, actually!

John Davis: Had you ever built a car before? 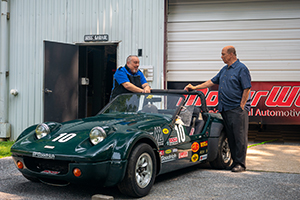 Pat Goss: Well, I had built cars, but I started from the ground up myself, and doing the whole thing, which is very different than buying parts and putting them together.

John Davis: What do you remember about this…I know it was 30 years ago, but I remember it like it was yesterday.

Pat Goss: Well, I remember a lot of the things that weren’t quite right, that we had to adjust and tweak and things like that, which anybody that’s going to build a car should be prepared for.

John Davis: Now, this car actually became part of a contest that MotorWeek had, and the winner of that contest was all the way down in the Florida Keys, remember we took it down there.

Pat Goss: I sure do.

John Davis: And a lady had entered the contest for her husband, and he was surprised wasn’t he?

Pat Goss: He didn’t know that he had entered or won.

John Davis: And the fact that it had how many pedals?

Pat Goss: Ha! He looked inside it, and he said ‘Oh My Gosh, it has three pedals!’ and he had no idea what to do with 3 pedals and a gearshift.

John Davis: Oh My! And then, a friend of ours, Michael Whitfield, back here in Owings Mills, not too far from our studios, he bought the Maxton, brought it back up, he raced it very successfully, but this car has been sitting sheltered inside a garage for the last 25 years.

John Davis: Well, waddaya think, Pat. Are you up to getting the Maxton back on the road again?

Pat Goss: Absolutely, and I’d love to get behind the wheel again!

John Davis: I can’t wait. So there you have it stay tuned for the rebirth of the Maxton!