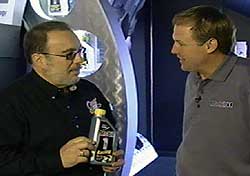 Pat Goss: As you know, we get a lot of letters concerning oils, and who better to explain some of the myths about oils than Nascar’s own Rusty Wallace.

Rusty Wallace: Hey, how you doing?

Goss: Oils, I mean you destroy oils out there.

Rusty: We do. No doubt about that.

Goss: Now, one of the myths is that oils in race cars, no one would ever use a synthetic. That’s wrong.

Rusty: That’s wrong. I don’t think anybody would use the old style oil anymore. Almost everybody uses synthetic. I mean you can take this oil, and I’ll put it in our car in the NASCAR Winston Cup circuit, take it out there. I’ve had cases where this might, my oil temperature gauge is pegged at 320 degrees, because we’ve got a piece of paper on the front of the grill. Heck, I’ve run 200 and 300 mile races without having any problem whatsoever. In fact, I’ve won races before at the oil temperature gauge peg, and you could never do that with non-synthetic oils. This stuff is really pretty bulletproof nowadays.

Goss: Okay. Now, the other thing, we’re always hearing that if it’s a race car, it’s going to be running 50 weight oil. Now, that’s changed, too.

Rusty: Yeah, a lot of people think that the more rpms you go, the hotter everything is, you’ve got to have this real thick oil, and that’s not necessarily the case. In a lot of cases nowadays, we’re qualifying in racing 0-weight oil. We’ve got a lot of very, very light oil. It’s getting to the bearings, turns a lot of rpm, less friction, less heat because of less friction, making more horsepower. And so we do a lot of experimenting with oils, but I’ve got to tell you, I mean we don’t race anything over 30 weight nowadays.

Goss: Isn’t that amazing? The changes are just phenomenal.

Rusty: They really are. Things have changed a lot, bearing clearances, materials, the oil. It’s just amazing how good Mobil’s worked to produce this style of racing oil and street car oil and to come up with a formulation. It’s just amazing out there. I mean I’ve got to tell you, when I walk into the dyno room and I see my engine on the dyno turning 9800 to 10,000 rpms, right now we’re working some engines that turn over 10,000, and we’ve got 0-weight oil in there, and I’m just sitting there watching this thing screaming on what we call the terminator, which is a dyno which we can actually run 500-mile races on it. You’ll hear the engine shifting on the dyno, you’ll hear it run 5 hours. And I’ll ask the guy, I’ll say, ‘‘What oil we got in here?’’ Well, there’s four or five different blends we might play with and help experiment with Mobil with, and he says, ‘‘Oh, that’s the 0.5 weight stuff.’’ I’m like, oh my gosh, and it’s just going crazy. Headers are glowing red. You take the engine apart, and the bearings look brand new. So it is absolutely a myth that you have to run 50-weight oil in these cars nowadays.

Goss: Rusty, thank you so very much.

Rusty: You bet. Thank you very much.