This time we’re going to talk about one of the hottest aspects of the automotive scene, that’s automotive electronics or mobile electronics. And here to discuss this issue with us is Matt Swanston from the Consumer Electronics Association. Hi, Matt.

Goss: All right, we’ve got quite an array here, so let’s start right here. 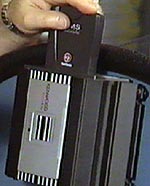 Matt: Here we have a portable hard drive that stores 10,000 MP3 music files, so you can put that on your computer. You load that thing up with all of your music, and then you put that in under your seat or in the trunk, and you’ve got access to them all from your stereo head unit like it was a 1,000-disc changer.

Goss: Wow, amazing. All right, what do we have here?

Matt: Here we have a mirror that when the monitor is off, it’s just a normal auto dimming mirror, but this one has the added feature of having a color monitor embedded in it where you can see the view from any number of cameras around the car, under the rear bumper or the front bumper, or in this case there’s also a camera over here that clips to the headliner of the car so you can see a child in a safety seat, for example, without having to turn around and see what they’re doing.

Goss: What about at night, though?

Matt: At night there’s a little switch on it that changes it to an infrared camera, so there are little illuminators around the outside and you can still see the child in total darkness.

Goss: It’s amazing stuff, isn’t it? All right, going down the stack.

Matt: This is a piece that has an added security feature. It hides itself and looks like a nondescript, just blank panel, but then when it comes out it has an interface for your cell phone. It can control your DVD player or CD player, and it plays MP3s on a CD so you can fit about 10 discs worth of music on one CD Rom. And it hides itself. This is a popular way of securing the equipment is for it to sort of disappear when you turn the car off. Here’s another piece that ejects its screen and then has the navigation system. That’s a DVD-based moving map color navigation system with a voice interaction, and it can also be used to play DVD videos, but only in the rear when the car is moving. You have to put the emergency brake down to get, pull it up to get any video in the front. 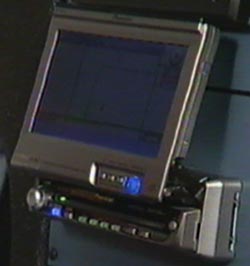 Goss: And that’s an important safety feature that people need to look for. All right, down at the bottom.

Matt: At the bottom there is a 6-DVD changer, so you can put it, fill it with a combination of music CDs and movie DVDs, and then just close it up and put it in the trunk, give the kids the remote, and they have their own monitors in the back and their own wireless headsets. They can change the movie and change the music and keep themselves very happy and quiet for a long trip.

Goss: Okay, now also there’s this big push about cell phones and using them, so here you have something that I think is very clever.

Matt: Yeah, this is a neat piece that you plug into your cell phone. It uses just a regular headset jack, but it clips to the back of your headrest, and it has a little speaker on one side and then a flexible microphone on a boom on the other side. And it lets you use your cell phone even while it’s on your belt, as a hands-free kit without wearing headphones or having it wired into the car stereo.

Goss: And that’s important, because some states don’t permit headphones.

Goss: Matt, thank you very much.