Out of sight, out of mind is how most people look at their batteries. Well actually, they don’t look at them at all. And that’s a bad thing because the battery is one of most important parts of every car on the road. And if you take the battery out of the car, you certainly can’t drive it; you can’t even sit in it and listen to the sound system. Well, to give us some pointers about new battery technology, we have George…battery expert. George, welcome to Goss’ Garage.

GEORGE: Great to be here, Pat. Thank you.

PAT GOSS: Alright. Tell us what’s going on with batteries these days. 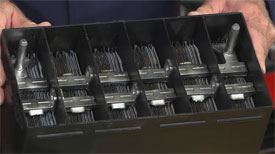 GEORGE: Well, what is in front of me is a traditional lead-flood acid battery. If we open it up, which we suggest you do not, you’ll see what’s missing is the electrolyte. Each of the cells, composed of the twelve volts that’s necessary to use in your system. What you have in front of you, Pat, is the new absorb glass mat technology, and what that means is that instead of the electrolyte, or that acid free flowing solution, it is being absorbed inside these plates; both positive and negative plates, with a certain retainer, and it’ll hold each of those positive and negative plates together, and replaces that electrolyte, or that acid solution.

GEORGE: Terrific. Longer life, each of these batteries, the absorb glass mat, has the ability, because of that less acid, and the condensing of the plates, to have thicker plates, more robust plates, and more life and more power.

PAT GOSS: Alright. And, there are things that affect the life of the battery that we didn’t used to have in cars. Parasitic draw from the keep alive memory of all the computers and electronics built into the car. And then, other things…

PAT GOSS: And, the technology in the automobiles themselves is changing, like stop/start technology.

GEORGE: Exactly. One of the reasons the manufacturers are moving to this new technology; they’re trying to use common parts that are used in Europe, for example start/stop technology; you’ll see a lot of these battery sizes coming on the market these days. And that is basically the absorb glass mat technology on those devices for those cars.

PAT GOSS: So, with a start/stop car, it shuts off every time you come to a stop. That means on your trip to work, you might start it and stop it a hundred times, as opposed to one in the past.

GEORGE: And another factor that’s very important here is heat. Most people don’t realize that heat kills the battery. And there’s an old expression in the battery business, that the battery dies in July, doesn’t fall over until December. So heat is a tremendous stress factor on the battery.

PAT GOSS: Ah, ok. So the absorbed glass mat battery fights all of these things.

GEORGE: Exactly. The robust plates, better construction, the fact that it’s an absorbed technology gives it the ability to, again, compress those plates and give it more power.

PAT GOSS: And that’s something to look for in your car. George, thank you. And if you have a question or a comment, drop me a line, right here, at MotorWeek.