One of the most common questions that I get is that, well, I took my care in for an oil change and the technician told me that instead of that thin, watery, 0-20, 5-20 or 5-30 that the manufacturer recommends, you need something this is seriously going to protect your engine. 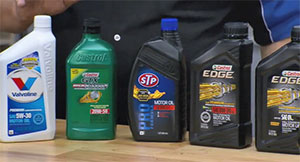 You need 20-50, 10-40, some of these really thick oils. Don’t believe it. Modern engines are different than older engines and going to a thicker oil, it can lead to all kinds of problems. Number one, it can lead to poor circulation in the engine because it’s too thick.

That poor circulation can lead to problems that we see here. We cut a valve cover apart. This area in here that’s all clogged up – that is part of the breather system for the crank case. We had to put new valve covers in the engine because of this crud.

We can see over there that we have another valve cover all gunked  up with sludge and so on. Why does this happen?

Back in the day when these oils were really popular, engines were made very differently. The clearance between bearings and so on inside the engine, between the cam shaft and cam bearing, or the crank shaft and connecting rods bearings, we could probably have measured them using an old fashioned feeler gauge.

But today, engines are built using modern technology, computer controlled machining, lasers to measure things and so on. So the net result is that these modern engines are much more precise. They fit better. The object of oil, the number one things is to move between moving parts and keep those parts from touching one another.

When we have smaller spaces, we need thinner oil to fit through those smaller spaces. Suppose you put a thicker oil in a modern engine. One of the things that’s going to do is increase oil pressure. Variable valve timing works off oil pressure so you might wind up with a check engine light and a code for the variable valve timing, which could lead to some expensive repairs.

My recommendation, stick with what the vehicle manufacturer recommends. They spend millions of dollars figuring out what was right for your engine.

If you have a question of a comment, drop me a line, right here at MotorWeek.