“Cool your jets.” It’s what you’d tell your buddy when they get a little too heated. Well Pat Goss has some wise words for when your engine does the same.

PAT GOSS: One of the things you do not want to do these days is to ignore the gauges on the dash of your car. You see, those gauges are pretty darn reliable.

If they tell you that something’s wrong, you had better do what the owners manual tells you to do to avoid serious damage and a lot of money going down the drain. 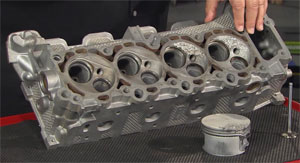 Here we have a cylinder head off of a late model automobile. This head is made of aluminum. On an aluminum head, we have steel valves. They’re really hardened valves and they allow the air to come into the cylinders and the exhaust to get out and they fit back in to these holes here.

On the back side of these, this has to be an airtight seal. There is a lot of heat here. So how do they make this work?

They take a hardened steel valve seat such as we see here, and they press it into the aluminum of the head. That gives the engine durability and the ability to withstand the tremendous heat that is generated here.

What happens when the engine overheats? Well in this particular case, the driver had a warning that the engine was hot. They figured that they could go just another couple miles to get it to the shop and they’d get it taken care of.

It didn’t make it that extra couple of miles. All of the sudden it went from the engine running fine to the engine making a lot of noise and then ten seconds later the engine starts running really really rough and making huge amounts of noise. 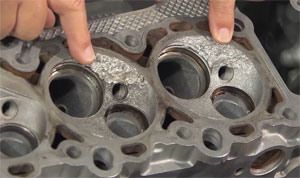 What happened here was, one of the cylinders got so hot that this pressed in valve seat came loose. With a valve hammering up and down against it, it cracked, broke up into pieces, then the pieces are being grenaded up and down inside the cylinders by the movement of the pistons. 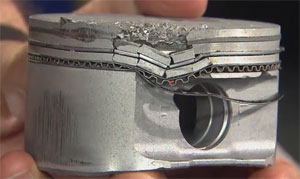 The engine was destroyed. Don’t try to go the extra mile when a modern engine is hot. Because this could happen. In this particular case, it was goodbye engine and hello about 9,000 dollars.

If you have a question or comment, drop me a line right here at Motorweek.