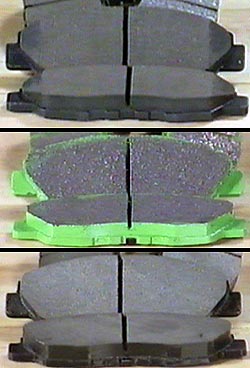 There are a lot of decisions that need to be made if you want to have good brakes, and here to explain some of those issues is Matt Edmonds from The Tire Rack. Hi, Matt.

Goss: All right. Brake pads, that’s the first issue. What do we have down here?

Matt: We’ve got three different performance categories of brake pads represented here. The Akebono pad here on the end is a OE organic replacement pad. When we say organic, the compounds that are used in that are an organic type of compound in the pad itself. The second one is a premium street pad from EBC. This is their Greenstuff pad. It uses a little different compound. It does not have as much metallic in it. It uses some copper as we see from the pad itself, as well as some ceramic, and this gives it less dusting and better resistance to heat. The last pad we have is a very aggressive pad. This is from Hawk, and it’s actually a pad made for the track and it’s a metallic pad. You wouldn’t want to use it on the street. It takes too long to get enough heat in it to make it work when you use it on the street.

Goss: Okay. Back here, what are these about? 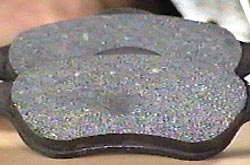 Matt:This represents some of the latest technology in brake pads from Satisfied, and it’s their GranSport line. It’s a line where they’re using carbon and ceramic to actually create the pad in the compound, and these in different combinations allow them to do pads that will do everything from a real street use up to a pad that is very, very good on the track. Again, less dusting, very resistant to heat.

Goss: Pretty clever. Now, you have your passenger car, your regular sedan, you want to have brakes like the sports car. That’s doable today. 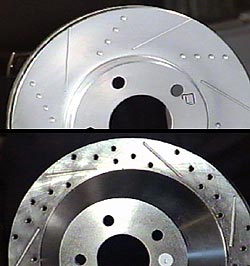 Matt:It is. By using the brake pads to help tune it a little bit you can upgrade your performance, but also by going to some rotors, using a different rotor such as this Power Slot rotor that has dimples and slots in it, giving the gas that is created when the pad puts pressure and the heat is built up on the rotor, gas is formed between those two. It gives that gas somewhere to go. The other thing you can do is go to a system very much like Baer has here in the EradiSpeed system that gives you a rotor, you just simply replace the rotor and use this bracket to relocate your OE caliper. This gives you better stopping because you’ve moved that caliper out and gone to an inch larger rotor.

Goss: And you’ve saved some money.

Goss: Okay, so if anybody really wants to do this right, they have to do some research.

Goss: Decide what they want from that research. Matt, thank you.