It never fails. You buy a new car, and before you know it, accidental scuffs and scratches ruin the finish and your mood. But, have no fear there are ways to deal with those unfortunate incidents.To give us some pointers we have Tim Mcowen from Mudgett's Auto Body in Finksburg, Maryland. Tim, welcome to Goss' Garage. All right, car gets scratched, what's the first thing the owner should do? 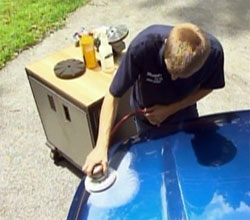 TIM MCOWEN: Take it to a professional and let them assess it.

PAT GOSS: You mean we're not supposed to get one of these TV kits or something and do it ourselves.

TIM MCOWEN: They don't work. Basically you need to go to a professional 'cause there's a lot of things that they can do. Determine number one can we sand and buff out the scratches, or do we have to sand and repaint the hood.

PAT GOSS: Alright, now the big thing there of course is the depth of the scratch. And you use your finger nail to do that?

PAT GOSS: Uh-huh, and you're going to take the hood off of this truck and do some sanding and buffing and we'll see the results in a little bit.

PAT GOSS: All right, now, there's another type of damage that we see a lot of these days and that's where someone's pulling out of a parking lot and they brush up against the side of your car, and they transfer the stripe of clear from there finish to yours. It looks horrible. What's the deal there?

TIM MCOWEN: Well, a lot of that will come off. A lot of that can be sanded and buffed off. And most time you'll never even know the damage was there.

PAT GOSS: So there particularly you don't want to get rubbing compound or sand paper or anything like that to try to do it yourself.

PAT GOSS: Because that's ultimately going to mean instead of sanding and buffing you're going to have to paint it.

PAT GOSS: While Tim's working on our hood, here are some points to remember. A lot of this can be do it yourself, but before you get involved in it, I suggest you get professional advice so that you don't do something wrong and make matters worse than what they were in the beginning. And above all, if you use any kind of product or chemical, or anything at all when you're doing this yourself, read all of the directions because not all products are good for all finishes. Tim, that looks a lot better. Something I could live with and it only took you about 20 minutes. What did you do?

PAT GOSS: All right, now one of the big things here is to know when enough is enough and not go through the clear coat.

TIM MCOWEN: Right. That's what it did. There's still a couple light scratches left, but I'm not going to go through them because if I continue to sand them I will go through the clear coat.

PAT GOSS: And this is a common mistake that do it yourselfers do, they just get too aggressive.

TIM MCOWEN: Right. Know when to say when.

PAT GOSS: Absolutely. And this would be a lot cheaper than re-painting the hood.

PAT GOSS:TIM MCOWEN: Yes, it would.