Most of us would like to have a fast, good looking car, and here to give us some pointers, we have Rick Robinson of American High Performance in Virginia. Rick, welcome to Goss’ Garage.

PAT GOSS: Ok, now my take on all this is one of the first things we want to do is make a plan.

RICK ROBINSON: Absolutely, and we try to sit down with all of our customers and talk about what they really want out of a car. How they plan to use it, what’s their end goal so that we can build a plan based on their needs. 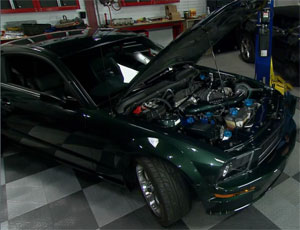 RICK ROBINSON: Budget is always a big factor. We always want more than we can afford, so we go through that with them as well.

PAT GOSS: Ok, now I just went through this with my Camaro here, and I didn’t want anything radical, I just did a cold air intake and axel back exhaust and a few odds and ends like that and I like the result because it makes me feel good.

RICK ROBINSON: It’s all about enjoying the car and that’s why muscle car owners buy the cars that we do, so that we can enjoying driving them.

PAT GOSS: Ok, now you brought a Mustang. Tell us a little about that.

RICK ROBINSON: I did. This is a 2008 Bullet car. It’s a tribute for the 40th anniversary of the movie with Steve McQueen. It’s a basic, simple car like the original was and it’s all about performance. So first of all, we wanted more horsepower out of it to get more speed, so we put the supercharger on it, but you don’t want to stop there because now you have a car that’s unbalanced. So we’ve upgraded the suspension, we’ve upgraded the brakes, we’ve upgraded the exhaust to make it all work together like it should.

PAT GOSS: So it’s a package deal instead of adding a piece here and there?

RICK ROBINSON: Absolutely. It’s a lot of fun to drive, too. 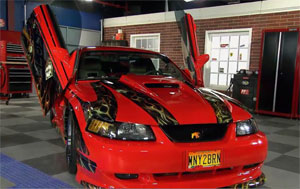 RICK ROBINSON: Bring a suitcase full, because that paint job alone will cost you a bunch.

PAT GOSS: OK. Rick, thank you so much. And if you have a question or comment, drop me a line right here at MotorWeek.