PAT GOSS: Alright, what in the world do we have here?

MICHAEL SMITH: This is a training tool that our organization developed to help educate the public, technicians and first responders about the differences on electric vehicles. This is a Toyota Prius that we’ve cut the body away so that all of those components are visible. 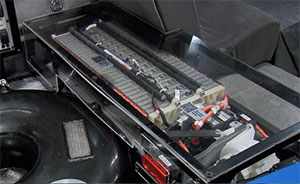 PAT GOSS: OK, we see the battery, what do we need to know about it?

MICHAEL SMITH: Well there’s two different battery configurations out there in electric vehicles. In a hybrid vehicle, a smaller battery capacity, this is what you would see and these are generally air cooled, where a larger battery in a Tesla or a Chevrolet Bolt has greater capacity, greater heat that it produces and therefor those are liquid cooled.

PAT GOSS: Alright, and we’ll talk more about liquid and so on in a minute. Specialized tools.

MICHAEL SMITH: Yes, it’s an industry standard that technicians when they’re working with a high volt system wear high voltage gloves, and that’s again to protect them against any high voltage shock. And a second level of protection can be with high voltage tools, which are tools that are wrapped in insulating material again to put another layer of protection in. 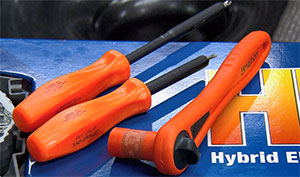 PAT GOSS: Alright, and one thing of course is the main disconnect.

MICHAEL SMITH: Yes, anytime a technician is working on a vehicle they need to understand there are two different electrical systems. The traditional 12 volt and there’s also the high voltage system. Everything that carries high voltage in this car is labeled orange. That’s a high voltage industry standard, and a technician can isolate that voltage to just the battery by removing what’s called the service disconnect. All electric vehicles have those.

PAT GOSS: OK, let’s go up front and take a look at the cooling systems on this car.  It has two of them, we need to know about the two systems.

MICHAEL SMITH: Sure, electric vehicles can have multiple cooling systems depending on how its configured. The Prius has two, one for the internal combustion engine, and one for what’s called the inverter unit. All electric vehicles have this because the motors are generally AC the batteries of course are DC, and you need to invert that electricity as it moves back and forth between the battery and the electric motor generator.

PAT GOSS: And both of these systems need proper maintenance. 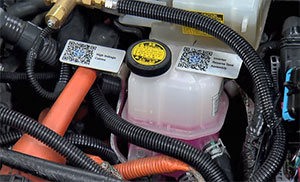 MICHAEL SMITH: They do, there’s a misconception out there that electric vehicles don’t require as much maintenance as a conventional vehicle and it’s pretty far from the truth. In that a hybrid vehicle has all the same systems that your conventional vehicle has because it has an internal combustion engine, it has a gasoline fuel tank, but it also has the electric system which also requires maintenance. Now a pure electric like a Tesla or a Chevrolet Bolt don’t of course have those systems, but of course you need to do tire rotations, brake maintenance and other things of maintenance for electric vehicles.

PAT GOSS: Alright, now what are the most important things about electric cars as far as consumers are concerned.

MICHAEL SMITH: Education. Most consumers don’t understand what the different types of electric vehicles mean to them. A hybrid vehicle can be driven just like a regular car. You drive long distances, you have gasoline to power the vehicle and you’re not going to require long term charging. Where an electrical vehicle would be a logical choice for someone who lives in an urban area, doesn’t drive a lot of long distances, but they’re looking to take advantage of those lower costs of ownership that electric vehicles offer.

PAT GOSS: Alright, so do your research first.

PAT GOSS: Michael Thank You. And if you have a question or comment, drop me a line right here at MotorWeek.