No matter if you have a new car or an old car if it has nice paint you want to keep it looking nice. And there are some ways to do that. And we have with us Eric from XPEL Technologies to give us some pointers. Eric, welcome to Goss’ Garage.

Eric: Thank you very much for having me Pat.

PAT GOSS: Alright, you’ve treated this car. Tell us about it. 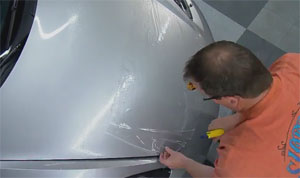 ERIC: So what we’ve done is we’ve put our paint protection film on this vehicle. So what it is is an elephatic urethane with an automotive clear coat with an adhesive layer on the back of it. Applied just like window tint we use a slip solution to get it the way you want  and then squeegee it down onto the painted surface just like you would on tin. And we’ve got a 30 inch kit that’s protecting the leading edge of the front with the hood and matching fender line, bumper and mirror backs where typically where typically the main impact areas of the vehicle. So the technology, what really makes this nice, is our self-healing film. So what do I mean by self-healing?  Its got elastomer polymers if you get scratches on the film, 20 minutes out in the sun it’ll come out on its own.

PAT GOSS: You have a rather ugly looking brush in your hand, what are you going to do with that? 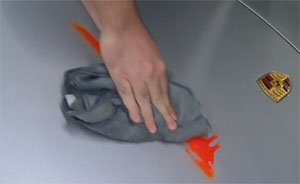 ERIC: If that kind of scenario was to happen, it would heal out on its own, your paint won’t come back but the film will.

PAT GOSS: Now, one of the things we see from time to time is graffiti. What can you do with that?

ERIC: Unfortunately, it does happen, every now and then, depending on where you’re at. The film can easily handle that with the right solvent or solution to take it off.

PAT GOSS: Alright, I guess the bottom line to all of this is you’re going to have a better looking car for a longer period of time and when it comes time for trade in you’re going to get more money for it.

ERIC: That’s correct, it’s about two different things. It’s about the car you love and you want to protect that no matter what, and the second thing is if you’re leasing a car on a 2 or 3-year term. Once you turn that car in and say hey dealership here’s the set of keys, I’m going to take a set of keys back 45 days later the leasing come just might hit you with a bill for the condition of how the car was up on the front. So, it’s better to finance the paint away and when you trade in the keys you don’t have to worry about it.

PAT GOSS: Eric, got it. And if you have a question, or a comment, drop me a line. Right here, at MotorWeek.