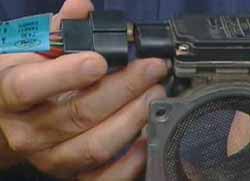 This time we have some quick, simple fixes for some big problems. One problem we find lots of times, cars that ping. It sounds like you’re running cheap gas. Well, when you go into the test procedure, you might find that it refers to a problem with the mass air flow sensor. This sensor tells the computer how much air is entering the engine so the computer can match that air with fuel. Well, when you get down to the end of the test, it tells you that the sensor could be bad, but what it doesn’t tell you in some cases is that very frequently it is the wire connector that plugs into the sensor that’s bad. As a matter of fact, it’s a common enough problem that some manufacturers are actually making replacement pigtails so you don’t have to buy the whole wire harness. So before you buy a mass air flow sensor, be sure that the wire connector that plugs into it has been checked thoroughly. 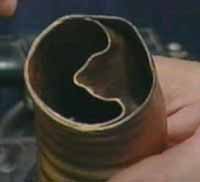 Here’s one that would give you a fit. This is the front exhaust pipe, or at least a section of a front exhaust pipe, off of a 4.3 liter Chevrolet Astro van. It’s a dual-layer pipe to keep noise down. And here we see that the inner layer of it has collapsed. This formed an exhaust restriction and the vehicle had very little power. We found the problem by using a digital thermometer, an infrared thermometer. And the pipe was much warmer before the place where it had collapsed than it was behind it. It could really drive you crazy finding that, and it happens on a lot of cars. 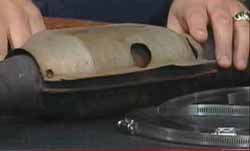 Another common problem, catalytic converters that make noise. The heat shields, the welds on them break loose. And when that happens, when you sit at the traffic light or accelerate, they may rattle like crazy. Now a technician may tell you that you need a whole new converter. That could be $200 to as much as $1,000. Well, that isn’t entirely true in many cases, because Ford Motor Company issued a technical service bulletin telling us that we can repair these by taking hose clamps and attaching them end to end until we get a complete unit that’s big enough to go around the converter. You tighten it up, the heat shield doesn’t rattle, you just saved yourself a lot of money  20 bucks as opposed to whatever the converter costs. 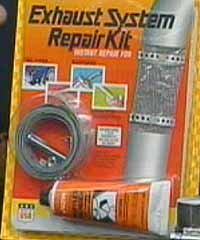 Now, exhaust pipes, tail pipes and so on, frequently get holes in them. And there are kits, especially if you’re travelling and you don’t want to spend the money out on the road, there are kits that are available in the auto parts stores to perform a temporary repair on those pipes. Now, that will get you home. But remember that any one of these things is nothing more than a temporary band-aid for the real fix.