John, wind leaks, water leaks, squeaks, rattles, noises. If you don’t have the right equipment, they can be very difficult to find and take care of, especially water leaks. Now that’s something if you don’t take care of it, it can lead to a lot of other problems, like the covering on the inside of this sunroof where it’s come apart. You may also find damage to upholstery, the carpeting can rot away. You can even get rust holes in the floor pan. 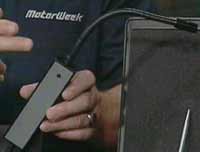 But let’s start with noises. Something like a catalytic converter heat shield. It’s real easy to find, but most noises are not that easy to find. Let’s say you’ve got a rumbling or a squealing noise under the hood. Well, here’s something that will do a great job. This is called an Engine Ear. All it amounts to is a set of headphones with a very sensitive microphone on the end of it. And the technician turns it on, moves it around in various areas, and where the noise is the loudest, that’s where the problem is. It even comes with a little probe that goes on the end of it for metal-to-metal contact. 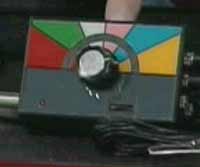 Now, maybe the noise isn’t under the hood. Maybe the noise is under the car. How do you find that? Well, it only happens while it’s going down the road. That’s where the Chassis Ear comes into play. This has six little microphones mounted into individual alligator clips with long wires on them. And those are connected to various pieces around where you think the noise is coming from. The wires are run up inside the car and they go into this distribution box. Then there’s a set of headphones again. As the car is driven and it’s making the noise, you can switch from one microphone to the other. And where the noise is the loudest, that’s where it’s closest to the problem. So then you move all of the microphones closer to the one where it was heard very plainly, and by process of elimination, you zero in on the exact culprit. 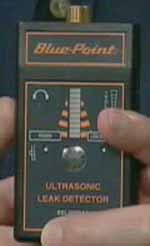 Okay, those are noises. Pretty easy. But those wind and water leaks. They can be a real nuisance to find. Here we have an electronic leak detector. Now this works - it’s a two-piece unit - works with a transmitter inside the car, and this receiver on the outside of the car. It’s turned on, and then you go along where the, in the general area where the noise is coming from, and as it gets close to the leak, it beeps loud and fast. And by doing that, you can zero in on where the problem is. Really simple.