New cars have an amazing array of high tech features. But what if your car doesn’t have exactly what you want? Well you might be able to find it in the aftermarket. One of those things of course is that new cars come with back up cameras. We have Mark Miller from Westminster Speed and Sound to give us some pointers. Mark, welcome to Goss’ Garage.

Pat Goss: What do we have here?

Mark Miller: That is a module made by NAV-TV that actually talks on the vehicles CANBUS network and allows you to have a back up camera image displayed in a color screen just like we did in this Mercedes.

Pat Goss: Alright, and this one?

Mark Miller: That is a lip mount style camera that’s designed to very much mimic the cosmetics and the performance of a factory camera. 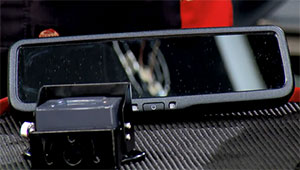 PAT GOSS: Not all cars have the center screen or any type of screen, what do you do then?

Mark Miller: So then you have to come up with something alternate. This is an example of a replacement rear view mirror that has an embedded LCD monitor in it that comes to life whenever you put the vehicle in reverse and shows the backup camera image.

PAT GOSS: And the big camera?

Mark Miller: That is a commercial camera. That’s a little different. It’s got to take a lot more use being in a commercial environment. It has to work really well at night. There’s even a microphone in it so the driver can hear what’s going on behind him when he’s backing up.

Pat Goss: We have some people who have had front mount cameras. Do you do those? 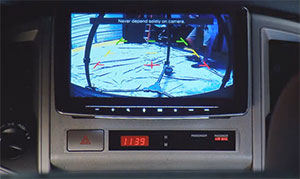 Mark Miller: We do. Normally we’ll install a little microswtich and when you get close to a curb you just tap that button and now you can see that two feet right in front of the camera.

Pat Goss: Pretty neat. Other things, that you have here in the Toyota.

Mark Miller: This is a 2010 model. It doesn’t actually have the capability of Android Auto or Apple Carplay when it was new. So we retrofitted an Alpine 9 inch system to give that feature set and then that big beautiful display now also has a back up camera.

Pat Goss: We have a lot of clients who are really seriously interested in blind spot monitoring. Do you do those?

Mark Miller: We do, and it’s typically done one of two ways. It’s either a camera system that’s mounted on the side of the vehicle and displays in your color screen in the dash or it’s a monitoring system that uses little LED’s and an audible alert to let you know if there’s somebody in your blind spot.

Pat Goss. Mark, thank you. And if you have a question or a comment, drop me a line. Right here at MotorWeek.