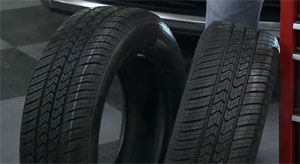 Then there are some things that are done in pairs for specific reasons, like tires. Tires, a lot of people replace just one. They say ‘well, I’m putting the same brand, the same model, and everything on,’ but that doesn’t mean that it’s the exact same tire. And the reason for that is, tires, they’re modified as they go through their life cycle.

There are little improvements that are made to them to address shortcomings and things like that. So even though it’s the same model, same brand and everything. It may not be exactly the same tire. And that could lead to handling or braking problems or something like that. So, minimum on tires, two.

Another part of the car that you want to replace in pairs, headlights. Headlight bulbs, over time, get dimmer. Now this does not apply to HID or LED. But incandescent lamps, they lose a lot of their ability to produce light over time. So at the end of three years you might lose 30 to 40% of your lighting capability. Even though the light still works, you’re not seeing very well at night. 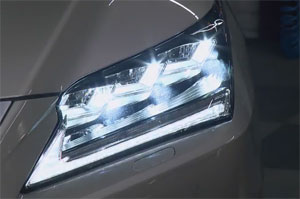 Replace them in pairs. And there’s another reason for that. Many modern cars, you have to take the front bumper off to put a headlight bulb in. So, you’ve got to go through all of that work? Why not do both of them at once.

One other thing; wiper blades. Replace them in pairs. And one thing about wiper blades, make sure you measure them. Because they’re often a different size from right to left. You don’t just buy two of the same thing. Another thing is that you don’t want this old style of wiper blade anymore. What you want is a beam type blade such as we have here.

This is where the blade has no pressure points or anything like that. It’s one continuous blade with a continuous spring in the center of it so it sticks to the windshield better, cleans better, and lasts longer. So, replace them in pairs.

…. And if you have a question or a comment drop me a line right here at MotorWeek.