You know tires have changed over the years. So have cars. And one of the more common problems that we find with automobiles in general has to do with tires. You see, tires change from being a tall tire, that’s the way they used to be. The distance from the rim up to the curve of the tread used to be quite a distance and it was relatively flexible. 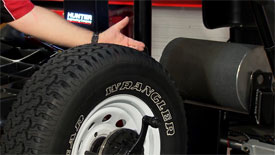 Today, tires are much lower profile. The distance from the rim to the top of the tread is less and the sidewall is much stiffer. This means that minor problems can be amplified and transmitted into the car and you feel things a lot more than you used to.

But everybody says alright, we’ll balance the tires. That’s part of the equation but balancing isn’t always the answer. So you have to go a step further. What we have here is a Hunter Road Force balancer. This takes it to a new level.

This roller back here comes out against the tread of the spinning tire. It applies 1,200 pounds of pressure to simulate the weight of the vehicle on the tire as it rolls down the road. Now a computer in the machine, and sensors, sense variations in the tread. Stiffness, or the tire isn’t completely round, or anything that would prevent the tire from rolling smoothly when its weighted by the car.

Then it translates that into a road force reading. We have a warning that it is excessive. Next thing we do is take some measurements. 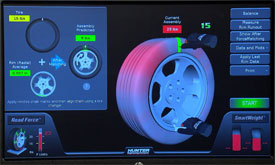 What we did is we took measurements of the rim. Of course the machine had already measured the tire. Now we can do what is called match mounting. We’re going to take the high spot of the tire and match it against the low spot of the wheel. It’s really more complicated than that, but to make it understandable… that’s what we’re doing. And it’s telling us here that we have 15 pounds of road force in the tire and if we swapped the tire around, moved it around on the rim, such as it’s showing us over here, that we can reduce this to 8 pounds total.

That brings us in spec and that means now we’re going to have a smooth riding tire.