And here’s something you might not be familiar with but it could be your car’s best friend. It is the wand to a power washer. Now, what are we dealing with here? 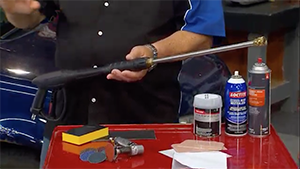 Well, we are dealing with a way to help prevent damage to the car like this. This is rust. And of course you don’t want to see that on your car but everybody has the mistaken idea that coats of wax and all these different things on the outside of the car is going to prevent rust. And it doesn’t. Rust doesn’t occur from the outside in, it occurs from the inside out.

Now, behind here you’ll find that there is another panel. Those two panels; the outer one and the inner one are very close together. And that means that dirt and grime from the road and so on collects over years and miles and builds up in there and fills that little channel. Well, that means that that dirt can hold moisture. Moisture gets in there and it’s held against the metal and eats away on the inside of the metal. Eventually, you’ll start to see bubbles, then you’ll see rust like this. 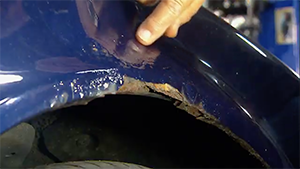 Then, you’ll see as the rust progresses it’ll go up under the paint and you will have a massive hole in your body panel, your fender, your quarter panel, whatever it is. Even the doors. So, by using a pressure washer, you can sometimes get up into those areas and flush out that dirt away. And by doing that, you help prevent the moisture that causes the rust.

Now, suppose you’ve already missed that boat. Alright, what do you do? Well, you can go on the internet, you can find all sorts of different things that tell you how to repair rust. With Bondo and all these different things that you might do, but there’s only one thing that’s even semi permanent and that’s replacing the sheet metal. So if you want it to be permanent, you have to learn how to cut and weld sheet metal and then how to finish it off. But even then, you need to get rid of the dirt that caused the rust in the first place. Because if you don’t, in short order, it’ll rust through your new metal as well.

And if you have a question or a comment, drop me a line, right here at MotorWeek.