Old Blue here is a 21-year-old van that has served well, but just like any older vehicle, and sometimes some newer ones as well, rust happens. Now, the thing that goes on, as vehicles age-- everybody likes to think that rust comes from the outside and it works its way to the inside of the vehicle. Uh-uh, that’s not the way it works.

You see, rust forms when we get areas like what we see here: This has that groove in it. That has filled up with dirt over the years and it’s only a matter of time until that dirt absorbs enough moisture to cause this piece of metal to rust out. Now, here we have a collection that came from the rocker panels in this. You look at this little, teeny hole on the outside and you start poking around, and all of a sudden you find that behind that, you’ve got a ton of rust. So, uh, rust is inevitable given time, but what can you do to help prevent it? 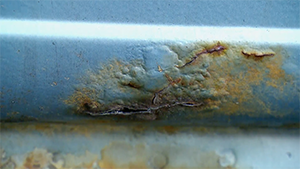 Well, you have to find the areas in your car where there are pieces of metal or channels where dirt can settle between the two pieces of metal or in that channel, and you have to try to keep that clean. If you look at the bottom of this door that we have cut apart here, you can see that there are areas in there where dirt can fit in there. It’ll collect over the years, and it will gradually eat away from the inside-out.

So, cleanliness and keeping the underneath of the vehicle and all of these, uh, pinch welds and things like that free of dirt, will make the vehicle last a lot longer and you won’t have to fight the ravages of rust. And if you have a question or comment, drop me a line, right here at MotorWeek.