A check engine light can drive you and your technician nuts, and one of the more common areas where we find problems is in the evaporative emission control system, or EVAP system as it’s called in the industry. This is the system that collects fumes from the fuel tank, stores them in a vapor canister, and then injects them into the engine to be burned instead of expelled into the atmosphere.

Now these are pretty sophisticated systems, but one thing that you have to keep in mind: in order to isolate it to the EVAP system, somebody is going to have to read codes, and the next thing you have to remember is that codes do not tell you the part that has failed, it only tells you what is being affected by what has failed. 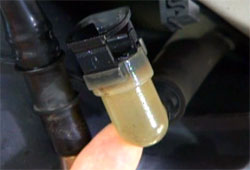 So, that means you’re going to have to do some testing, and the number one thing you check whenever you have an EVAP problem is the gas cap.  They fail quite frequently.  Alright, next thing you’re going to look for is liquid fuel in the EVAP hoses, like in this particular one, in the plastic elbow, it has liquid gas in there.  That can set the code and it can also damage other parts in the system.  What causes it? You cause it!  You top off the tank, and when you top off the tank too much, liquid gas overflows into the EVAP system, and you’ve got a check-engine light and possibly some expensive repairs. 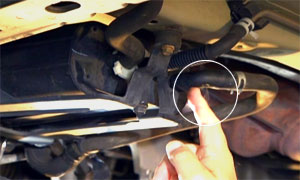 But many times that won’t be the case, there may be a leak.  Now, how do you find a leak?  Well for that you use a smoke machine, such as we have here.  We’ve got the machine turned on, we’re feeding smoke into the EVAP system, and we simply follow along the tubing and so on to see where the smoke comes out.  In this particular case, we have a pinhole right here that is leaking smoke.  That means that little rubber elbow is bad, it has failed due to age and road debris, different things like that. .. needs to be replaced.  Now, in many cases the holes will be so small you cannot see them without the smoke.  So the lesson here is to be sure before you take your car into a repair shop, you ask them if they have a smoke machine, so they can properly and effectively check the EVAP system on your car.