Now here's a part of your car that you may not recognize. All cars now have them, but they're usually well hidden either under the hood or someplace under the body of the car. This is a vapor storage canister. You see, many years ago, before emissions control systems on cars, what we had was a gas tank that was vented directly to the atmosphere. So the fumes that are produced as gasoline evaporates, they went out into the atmosphere, and polluted it. 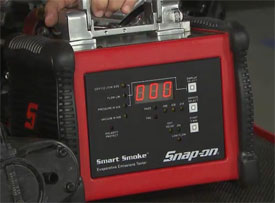 Well now, the way this works is, that those fumes are transmitted from the fuel tank to the vapor storage canister through a series of hoses and filters and check valves and electric solenoids, and a whole bunch of different things. Quite a complicated system. Now, because it's complicated, there are quite a few problems with it. Now you may get yourself in trouble if you go to a shop that simply reads a code, and then replaces the part that is described in the listing for that code. 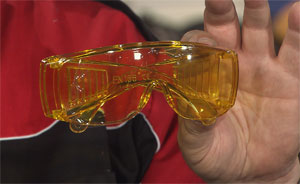 See that doesn't usually work, now you have to test the system, and in order to test an evaporative emission control system, well, you need a tool like this. This is a smoke machine, and it produces smoke. Now what we do with that smoke is we put it into the appropriate hose either at the back of the car or up under the hood of the car, and we follow the smoke.

Where the smoke comes out is where the part is defective, and that tells us exactly what we need to replace. Now to help the technicians spot the leak, we have a special pair of glasses that enhances the visibility of the smoke, because sometimes what we see is very very small.

The big thing is, if you really want to get it fixed and save money in the process, well you look for a shop that has one of these smoke machines, and that they use it in your test procedure. And if you have a question or a comment, drop me a line, right here, at MotorWeek.