When the weather turns cold and you get some ice and snow on the windshield of an automobile, drivers do some pretty strange things. First they go out, they start the car, turn the defroster on the maximum heat and maximum blower. That way they’re going to get the car warmed up and they’re going to get rid of the ice. Well, they might get something they don’t expect, and that is, that little stone chip, well it might migrate into a great big crack because of the temperature differential: the hot air inside; the cold ice and snow on the outside. Something you really don’t want to do. 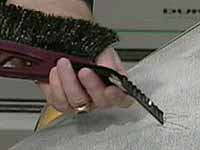 But then, even if they don’t do that, they take the ice scraper and they’re going to get rid of the ice, and the best way to do that is they take the corner of it and they really start leaning into the ice. Well, that cuts the ice. No question there. But it also many times scratches the windshield. And also never use an ice scraper on an outside mirror. You see these mirrors are also very easy to scratch and they can be very expensive to replace. So don’t use the ice scraper there.

One way to help control ice and snow on the windshield is to use Rain-X. This will keep it from adhering as tenaciously to the glass as it normally does. It makes it a lot easier to get rid of it. Another thing that you can do, a windshield cover. You put it on at night, you get up the next morning. If there’s some ice and snow, you just peel that windshield cover off and away goes all the ice and snow with it. It works quite well.

But once you’ve done that, you need to drive the car, and it may be snowing. And as you drive, snow builds up in the wiper blades and that gradually distorts them until they just barely touch the glass. And you have to stop and knock the ice out of them and so on. Well this is a winter wiper blade. It has a rubber covering on it to keep ice and snow from building up in the framework. They work very well. But remember, take them off in the summer. The sun just totally destroys the rubber coating.

There are also blizzard blades. Now these are rather interesting because they’re heated wiper blades. They come with an adaptor to plug into the cigarette lighter, or one where you can hard-wire it. It even has a switch to turn them on and off. Quite effective. 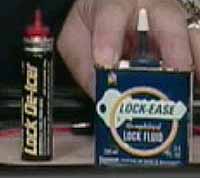 Okay, so now we’ve dealt with the snow and ice and so on. But, you know, maybe we weren’t even able to get into the car in the first place because the door locks were frozen. Now why did they freeze? They froze because there’s moisture in the locks. Why did the moisture get in there? Well, because you didn’t, early in the season, you didn’t use a graphite lock lubricant. That’s what keeps them from freezing. So, whenever they do freeze, you can use a lock de-icer. But remember that the de-icer typically has alcohol in it, and that will wash the lock lubricant away. So every time you use the de-icer, you’ve got to follow it up with the graphite lock lubricant. And that is the very best thing to use on locks ,  any lock.